Repeats and Uniques: A Look at 2015’s Festival Season

Now that three of the biggest music festivals in North America — Coachella, Bonnaroo, and Governors Ball — have announced their 2015 lineups, it’s time to break down this year’s crop of sweltering, three-day long showcases. Much has already been said about how this summer looks to be Drake’s for the taking, what with headlining slots at two of those three already secured, but it’s to take a magnifying glass to the fine print on those posters to parse through both the recurring trends (electro-pop ladies) are having quite the resurgence) and its glaring omissions (where’d all the rap and R&B go?).

It’s also important to note that we haven’t yet gotten the lineups for two of the biggest festivals in the country, Lollapalooza and Austin City Limits, but since both are booked and promoted by the same company (C3 Presents, recently purchased by Live Nation), and judged by past years’ overlap, it seems like a fair guess that they’ll both look like a mishmash of Bonnaroo, Coachella, and Governors Ball. Here’s how we broke it down:

Artists That Keep Showing Up:

Mø: This Danish singer who supplied the hook on Iggy Azalea’s “Beg For It” might’ve hit a stumbling block in her clunky Saturday Night Live appearance this past October, but all three festivals’ organizers seem to have turned a blind eye to the backlash, booking Mø towards the lower end of all of their lineups. She’s already got a strong enough catalog to keep newcomers interested, and her Spice Girls cover, “Say You’ll Be There,” crackles with Lorde’s trademark gloom-rasp emotion. Show up early and give her the time of day. 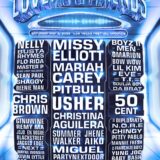 Deadmau5: Is 2015 going to be the year where the Mau5 re-ascends to the top of the EDM hierarchy? Last year, Calvin Harris and Axwell ^ Ingrosso topped festival bills worldwide with their dance-pop leanings, and for good reason: Their live shows are pyrotechnic marvels. Look at this year’s Bonnaroo poster and you’ll notice that Deadmau5, born Joel Thomas Zimmerman, is billed third after only the legendary Billy Joel and recent Grammy darlings Mumford & Sons, which seems imbalanced, given that Deadmau5 didn’t have a particularly banner 2014 in terms of visibility or musical output. However, the dance-floor wizard does have an album to promote (last year’s while (1<2)), and his chutzpah is enough to keep a crowd of 80,000 or more captive.

Tame Impala: Even though there’s been a fair amount of enthusiasm for Tame Impala in the three or so years after the release of their most recent record, Lonerism, their festival climb has been surprisingly rapid. In 2013, they played Coachella as a “third-line of the poster” band, but in Indo this year, the five-piece commands second billing under AC/DC. Sure, Tame Impala have a new record due later this year, and “Elephant” has even popped up in a Blackberry commercial, but where’s this massive groundswell of support coming from? Mark Ronson clearly saw something in the group’s lead singer, tossing him on three of his Uptown Special tracks this week, but their headlining placement this year is a pleasant head-scratcher.

Artists That Haven’t Shown Up (Yet):

Tinashe: The recent SPIN interviewee’s absence is an obvious oversight on all three lineups. She turned 2014 all the way up with “2 On” but proved she wasn’t just a one-hit wonder with her stellar debut full-length, Aquarius, in the fall. Her live show is a tightly choreographed blast — her synth-drenched collaboration with Calvin Harris, “Dollar Signs,” incites madcap dancing — filled with booming tracks that could pack in audiences. Sure, she’s busy touring with Iggy Azalea this spring, but her schedule leaves gaps that could’ve allowed for a Coachella appearance along the way. The fact that she’s been snubbed is pure poppycock.

Sleater-Kinney: One of the year’s most eagerly anticipated comebacks arrives courtesy of Corin Tucker, Carrie Brownstein, and Janet Weiss. Next week, Sleater-Kinney will release No Cities to Love, their first full-length in ten years, one packed with brilliance that’ll be followed by a nearly sold-out, cross-country spring tour. The iconic indie-punk trio seems ripe for a headlining slot at any festival that would have them, but Brownstein herself told the New York Times earlier this month that she’d carved out the summer to film the next season of her IFC comedy, Portlandia, to be followed by a fall tour. Grumble.

Missy Elliott: People still care about the beloved rapper, and hers would be a crowd-drawing return to the stage. Last summer, Missy joined Pharrell onstage at the BET Awards for a performance of “Pass That Dutch” and the Internet nearly imploded on itself. The support is certainly there, and even though she’s been elusive for a minute, she’s certainly got the stable of hits to stand on: “The Rain (Supa Dupa Fly),” “Get Ur Freak On,” “Work It,” and “Lose Control” alone make the case for a late-night Bonnaroo headlining slot, and the list literally goes “On and On.” It’s likely that Missy’s been asked and declined due to the health issues (Graves’ Disease, a thryoid condition) she cited in her episode of VH1’s Behind the Music in 2011, but still, we can dream.

Artists That Stand Out:

Tanya Tagaq, Bonnaroo: She’s a Canadian throat-singer who won last year’s Polaris Prize and consistently churns out some of the most fascinating, genre-bending, captivating music north of the border. Don’t write her off just because her body of work isn’t instantly accessible.

Björk, Governors Ball: Even if the Icelandic legend hadn’t just announced her upcoming album, Vulnicura, she would’ve been a massive get for the young New York City festival. With a gigantic catalog to back her up, the former Coachella headliner — the first woman to top that bill, back in 2002 (and again in 2007) — has a special place in her heart for New York (remember, she treated the city to a series of performances at the Museum of Science in the wake of Biophilia‘s release, and she lives in Brooklyn), which is why her Governors Ball slot feels like a natural fit.

Cashmere Cat, Coachella: If you haven’t yet heard of the Norwegian producer (born Magnus August Høiberg, naturally), you’ve at least heard some of his more recent behind-the-scenes collaborations with Ariana Grande, Usher, Tinashe, or Charli XCX on the radio. He knows his way around brat-pop (“Break the Rules”) and plinking, glittery R&B (“Body Language”) and he comprehends the future of deep-house and pop (his rework of Grande’s “Be My Baby” is breathtaking). It’s not hard to imagine Cashmere Cat dipping into his Rolodex for his sole festival performance.