Here’s a Venn Diagram of the Overlap Between the Coachella, Bonnaroo, and Governors Ball Lineups 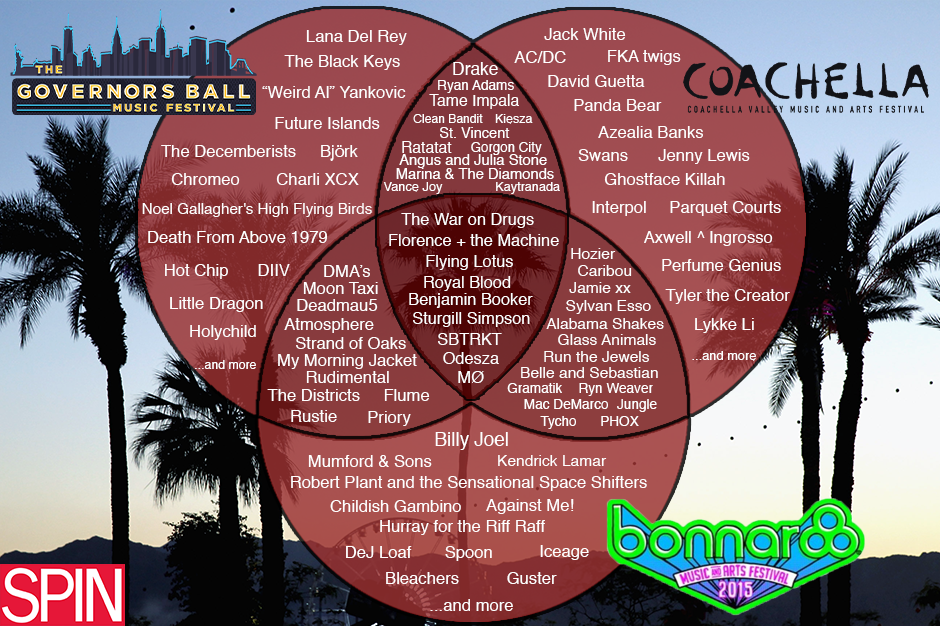 There’s a finite number of popular bands and artists, so it’s only natural that three of the most hotly anticipated festivals of 2015 — Coachella, Governors Ball, and Bonnaroo — would book some of the same artists. As the above graphic illustrates, a few dozen of said artists are going to have an especially busy summer. Most notable, perhaps, is Drake’s presence on the top of the Gov Ball and Coachella lineups, but he’s by no means the only big name pulling double duty. Ryan Adams and Tame Impala will also play both showcases, while Deadmau5 is dropping by Bonnaroo in addition to Governors. Special props to the nine acts who hit the trifecta, including Florence + the Machine and the War on Drugs.

Sure, there are still loads of acts that are exclusive to one of the big festivals, but if you’re really just in it to see any one of the following musicians you’ve got plenty of options, which we’ve listed below. And, hey, if you can’t snag a ticket or make it to any of these three, don’t sweat it. Odds are you’ll get another crack at some of them come Lollapalooza.

Correction: An earlier version of this post said MØ was only playing Governors Ball and Bonnaroo. She is playing all three.