“Why won’t they talk to me?” squeaks a small but emphatically overdubbed voice midway through Tame Impala’s second album. It’s got the pitch and ache of a kindergartener during his first day on the playground, an internal voice that for most adults never goes away completely, particularly when in the company of some significant stranger who reduces us to the helplessness of a whimpering puppy.

Pitched high around the cracking points of falsetto and emanating from the same sobbing spot in the back of your throat, this is the favored vocal expression of Tame Impala’s Kevin Parker. Despite his shyness, he’s the emerging rock figurehead of Perth, the coastal Western Australian city yielding overlapping bands like Pond and Canyons that share his proclivity for juxtaposing sugary melodies and bombastic beats against head-spinning studio effects via psychedelia, prog, and other anachronistic styles. The 2010 debut Innerspeaker transformed TI into Perth’s most acclaimed upstart act — very much a band in concert, but a solo project in the studio — and as this second album’s title suggests, the region’s most emotionally, if not musically, forlorn. Since he was 12, Parker, the son of immigrants from Zimbabwe and South Africa, has written songs by replicating himself singing and playing almost everything in an isolation that is Lonerism‘s near-exclusive subject.

So, if no one will talk to him, he’ll talk to himself. Imagine if the traumatized yet sweet-natured protagonist of 1999’s coming-of-age novel and indie-film hit The Perks of Being a Wallflower had secret musical chops; and rather than writing letters to an imaginary friend and making mixtapes for an unobtainable crush, he instead composed dream-pop symphonies that nailed the melodic complexities of his forebears, and then ran them through multiple fuzz/reverb/phasing/delay/modulation/distortion devices to suggest the psychological torment inflicted by his molesting aunt, denial-ridden parents, bullying jocks, conflicted female companions, and suicidal BFF. That’s Lonerism.

“Gotta be above it,” goes the whispered chant wending all through the opening track, as if Parker’s psyching himself up for a sequel sure to be scrutinized by the hipsterati. This time out, even the rhythms are gloriously fucked by the mixing-board gizmos of indie-producer-supremo David Fridmann; whereas Innerspeaker aimed to create electronica solely through guitars and sound manipulation, this one adds actual synths (vintage analogue models, of course) to his cosmic medicine chest. “I’ll just close my eyes and make it so that all these little things don’t affect me now,” the singer chirps in a voice that suggests the damaged inner child John Lennon concealed beneath the screams of Plastic Ono Band, as ricocheting double-time drums and slasher-film synth chords exacerbate the ticking-time-bomb suspense. Instead of the fake bravado that often mars sophomore albums, our hero instead dives face-first into his predicament: Can I put the real me out there and not be torn apart? 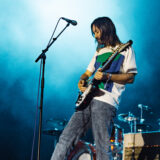 Parker learned to play guitar by jamming with his dad, a former Beatles/Beach Boys/Supertramp cover-band member. As you might suspect, the son digs the Flaming Lips, too, along with Sweden’s exactingly proggy Dungen, a combo reflected in this album’s explosive “Endors Toi.” But his fantasy collaborator is Britney Spears, and he’s allegedly toiling on an entire album dedicated to his apparently oblivious countrywoman, Kylie Minogue. True to his outsider identity, Parker is clearly already rebelling against the expectations that come with winning Album of the Year honors in Australia’s Rolling Stone, and so he sticks shameless bubblegum piano riffs into “Apocalypse Dreams” while hitting notes higher than those even Spears and Minogue can achieve.

His real-life ally is French chanteuse Melody Prochet, whose new Melody’s Echo Chamber he played on and produced. But unlike distant pop divas, actual girlfriends bring genuine conflicts, here expressed with unsparing candor: “A beautiful girl is wasting my life / I’m playing a part as somebody else / While trying so hard to be myself.” In “Nothing That Has Happened So Far Has Been Anything We Could Control,” he calls his beloved “Elodie” while hammering out hammy Ringo Starr drum fills until he concludes on the fade-out that “Every man is happy until happiness is suddenly a goal / I’ll just be here waiting till the doctor calls….”

The troubled soul Parker presents, his girl problems, the struggle for authentic manhood, the interplay between angelic choirboy fa la las and barely contained instrumental violence…these are the building blocks of power pop as practiced by early Who, Badfinger, Big Star, or Todd Rundgren (who contributes a superior, non-album remix of the giddy yet stomping single “Elephant”), and other typically self-destructive man-child rockers of the ’60s and early ’70s who’ve inspired countless safer, lesser imitations. Parker’s gift is not only that he goes psychologically deeper and darker than most acolytes of those bands — all while rendering exacting replications of complex psych-prog chords and harmonies that pretenders can only approximate — but that he also distorts and personalizes the outcome.

This lonerism, like that of Nick Drake, Ian Curtis, Kurt Cobain, or Elliott Smith, feels dangerously genuine, yet not nearly as despairing. For all the alienation implied by the album’s continually warping and waving center of gravity, there are colors here brighter than a child’s watercolor rainbow. Parker’s little boy may be emotionally bruised, but his capacity for capturing bliss remains unblemished.