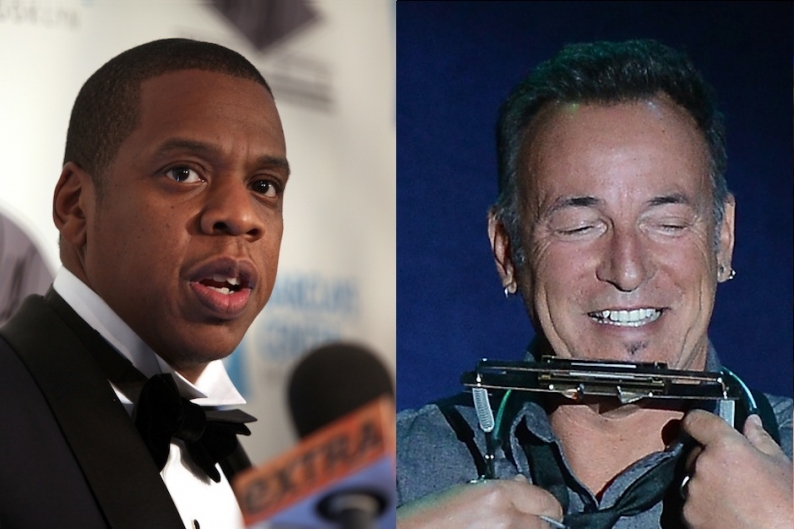 The 2012 presidential election campaign will end, as it has bizarrely often been fought, in music. President Barack Obama will spend November 5, the last day before Election Day, with Bruce Springsteen and Jay-Z, according to an announcement.

Obama will start the day in Madison, Wisconsin, with Springsteen. The two will then be joined by Jay in Columbus, Ohio. Obama and Springsteen will end the day in Des Moines, Iowa, joined by First Lady Michelle Obama. Springsteen will perform in each of three locations, and Jay-Z, per the offiical word, “will follow Springsteen on stage and introduce the President after his performance.” The Obamas will spend the night back at their home in Chicago.

The Boss and Hova have been stalwart Obama supporters this election. Though Springsteen initially told the New Yorker he would stay off the stump this year, his new album Wrecking Ball was so in line with the Democrats’ we’re-all-in-this-together message that Obama walked off the stage to single “We Take Care of Our Own” after his Democratic National Convention speech. The Boss has since written an eloquent endorsement of the president, and campaigned for him in multiple swing states. Jay-Z, meanwhile, stars in his own Obama ad and recenly gathered $4 million for the president at a fundraiser with wife Beyoncé.

Coincidentally, the president’s schedule on Monday will align Jay-Z with his one-time New York rap adversary Nas. When Obama appears alongside Springsteen in Des Moines, they’ll be returning to the first state to vote for Obama in the 2008 primary season. The night of Obama’s historic victory, he gave a speech in Des Moines that Nas wound up using on his track “Black President.”

It was in that Nas-sampled Des Moines speech that the now-president declared, with the type of soaring rhetorical flourishes he has studiously avoided in the White House (lest he be accused of being too good at speeches by the same mainstream pundits who now blame him for failing to explain his accomplishments): “They said this day would never come. They said our sights were set too high. They said this country was too divided, too disillusioned, to ever come together around a common purpose.”

If the country has, to a tragic extent, indeed remained starkly divided, despite the passage of universal health care and an overhaul of the financial system, the music industry has been almost comically united in support of Obama (see SPIN Election 2012: 12 Musicians on the Key Issues). As Pitchfork points out, the latest musician to step up publicly for the president is Arcade Fire’s Win Butler, who wrote an essay stressing the incumbent’s ability to communicate with other countries. Butler, an American citizen living in Canada, argued, “I want four more sweet years of Canadians liking Americans.”

Recent photographs of Katy Perry dressed as a human ballot during an Obama benefit recently illustrate the extreme extent to which politics and music have been entangled in this election. A signature moment of the campaign was when Republican vice presidential nominee Paul Ryan said he listened to Rage Against the Machine, and the staunchly liberal band’s Tom Morello shot back that Ryan is the “embodiment of the machine that our music has been raging against for two decades” (Rage get caught up in GOP politics unusually often). And then there was Ryan’s tin-eared GOP convention attempt to establish his youthful bona fides by saying his iPod playlist ends in “Zeppelin.”

Just as musicians have been sucked into the political fray, so, too, has Obama been drawn into pop-culture debates. One interviewer asked the Leader of the Free World about Mariah Carey and Nicki Minaj’s alleged American Idol feud. Another forced him to explain that just because Minaj rapped, “I’m a Republican voting for Mitt Romney,” that doesn’t necessarily mean she really is a Republican voting for Mitt Romney. (Minaj later confirmed Obama’s Hip-Hop 101 explanation.)

Most often, there’s been a strange back and forth. Foo Fighters played played a benefit for Obama; R.E.M. demanded Fox News stop using their music. The National played played a benefit for Obama; the guy from Twisted Sister demanded Ryan stop using his band’s music. Kid Rock, Meatloaf, and country star John Rich have been out there fervently supporting Republican presidential nominee Mitt Romney, and Creed’s Scott Stapp all but read a Romney ad script in a Fox News interview; Silversun Pickups demanded the Massachusetts governor’s campaign stop using their music. But the Killers, described by Romney as “one group I enjoy,” have remained carefully neutral.

The saddest truth: A Romney win might paradoxically be better for music, because it could give these artists something more tangible to rebel against. Then again, as writer Maura Johnston astutely noted this week in the Guardian, Ke$ha’s “We R Who We R” and other recent pop hits are already advocating for the idea that you should accept yourself no matter what guy in a suit thinks you shouldn’t have the same rights as anyone else. That’s not the argument Obama, Springsteen, and Jay-Z are likely to bring on the trail next week, and you can bet they’ll leave the glitter at home. But in a way it’s more radical.