The buck really does stop in the White House 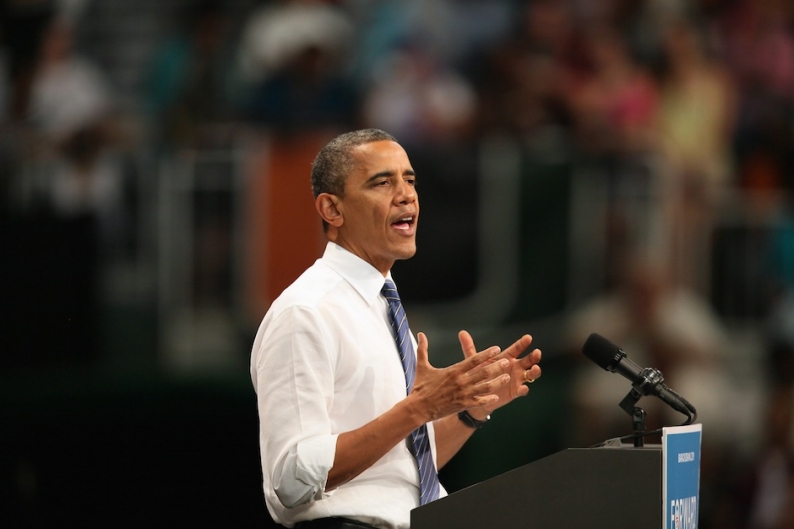 President Barack Obama and Republican presidential nominee Mitt Romney square off tonight in the second of three Presidential debates, this time in a town hall-style forum. The AP cites administration officials who say special operations strike forces stand ready over Africa if called to respond to last month’s attack on the U.S. consulate in Libya. The New York Times notes today that whoever wins the election, a divided Congress faces a “fiscal cliff” that could dictate a new administration’s options over the next four years. And Obama is being asked to weigh in on American Idol.

As Speakeasy points out, Obama called into Miami radio program The Michael Yo! Show over the weekend, and the host asked, “Can you repair the relationsihp with Mariah Carey and Nicki Minaj on American Idol?” While we hope this isn’t the type of question that comes up at tonight’s debate, Obama’s reply was at least more hopeful than the “kick the ball down the field” approach Romney described behind closed doors for the Israeli-Palestinian conflict. “I think that they are going to be able to sort it out, I am confident,” the President said. “I’m all about bringing people together, working for the same cause, so I think both outstanding artists are going to be able to make sure that they’re moving forward and not going backwards.”

Asked which artist he prefers, Obama didn’t duck this crucial issue. “Mariah,” he said. “She’s actually done some events for us. I’ve gotten to know her and [husband] Nick [Cannon]. She’s a wonderful lady. Nicki, I don’t know, but I’ve got her on my iPod.”

Previously, Obama was forced to explain to another radio interviewer that just because Minaj rapped that “I’m a Republican voting for Mitt Romney” might not actually mean she’s a Republican voting for Romney. Others weighing in on Carey and Minaj’s Idol drama recently include Barbara Walters and Stevie Nicks. Whether it’s for a TV singing competition or on a national, will-pick-your-next-Supreme-Court-nominees level, democracy can be messy. The Carey-Minaj crisis: Bruce Springsteen’s next album subject?