The Boss joined the big dog in Ohio, then went solo in Iowa 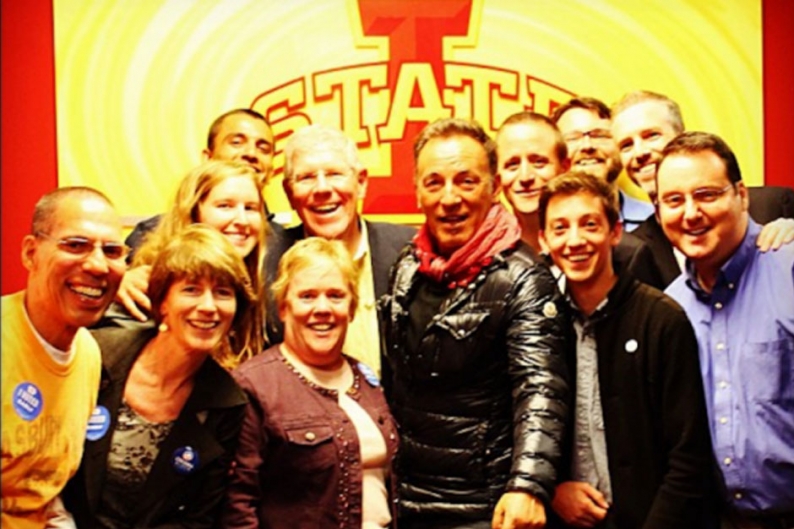 Bruce Springsteen shared the stage with a famous saxophone player yesterday, but the late Clarence Clemons’ nephew Jake and his E Street Band-mate Eddie Manion have no reason to fear. Former President Bill Clinton, who introduced the Boss at a rally for President Barack Obama in Parma, Ohio, limited his performance to spoken-word. For Springsteen, that was challenge enough: “I feel like I’m going on after Elvis,” he told the crowd of about 3,000, Reuters reports.

Springsteen then played a seven-song, all-acoustic set, including Woody Guthrie’s “This Land Is Your Land” and his own landmark track “Thunder Road.” Watch the whole thing below, via Consequence of Sound. During the set, Springsteen joked that the Obama campaign had asked him to write a song based around the slogan “Forward,” then debuted a strummy, goofy new call-and-response ditty that according to the Washington Post is titled “Forward and Away We Go.” You can skip straight to that here; he makes lots of jokes about the difficulty of rhyming Obama’s name, so keep your expectations in check.

Clinton and Springsteen parted ways, but the Jersey legend wasn’t done stumping for the President. He headed straight to Ames, Iowa, where according to the Des Moines Register he played in front of “thousands” at the Iowa State University campus Hilton Coliseum. That set list also included “Forward” and “Thunder Road,” and you can watch a bit of his Iowa performance of the new song below, too.