Bruce Springsteen has come unstuck in time. At 32, he released Nebraska, a stark acoustic opus weighed down by the weariness of a man twice his age. At 58, he railed loudly against the moribund state of rock radio, pleading for a thousand guitars and pounding drums, name-checked Against Me!, and convincingly exhibited a feistiness seen too rarely in artists half his age. Now, at 62, just a few months after he lost Clarence Clemons, his brother-in-arms of four decades, Springsteen could have tackled mortality on his 17th studio album in a way that he never has before. And Wrecking Ball is nothing if not a record about death. But it’s primarily about the death of a nation, or the death of an idea of a nation, which is as firma as Springsteen’s terra gets: consistently spirited and glowering, a discomforting album that never leaves his narrative comfort zone, equal parts impersonal and important.

Even if the populist stance is boilerplate Bruce, the anger behind “We Take Care of Our Own” and “Death to My Hometown” couldn’t be more attuned to the current political climate, when Republican calls to deprive the indigent of health care are greeted with ringing applause. (It’s fun to imagine the latter song as a stomping, Jameson’s-soaked sequel to Born in the U.S.A.‘s elegaic “My Hometown.”) There are no revelatory gems like “Girls in Their Summer Clothes,” but as a whole, the album is heaps more effective than 2009’s Working on a Dream. The deceptively jubilant title track manages to render the concrete blight that is the old Giants Stadium (demolished in 2010) as a sympathetic protagonist, just another body left on the side of the road, no different from the unemployed blue-collar narrator of “Jack of All Trades.” But this anger also creates distance; the harder Bruce Springsteen works to speak for us, the more it seems like he’s speaking at us. “You’ve Got It” is the only song here whose primary objective is to get someone laid.

Running themes of disappointment and rebuke notwithstanding, this is not a bleak-sounding album, and while the themes may be familiar, the names in the liner notes are less so; Tom Morello plays guitar on two songs, while Nils Lofgren and Steve Van Zandt play on zero. The folk-traditionalist pennywhistles and banjos of 2006’s We Shall Overcome: The Seeger Sessions are entered into general population here, along with gospel trappings and drum loops, often within the same songs, and, on “Rocky Ground,” there’s a not-embarrassing rapped verse courtesy of gospel vocalist Michelle Moore. But the kitchen-sink blend of styles (by Springsteen standards — no dubstep yet) isn’t as jarring as one might expect. It does, however, make what’s not on the album all the more conspicuous, inadvertently or not.

When Clarence Clemons died following a stroke last summer, he wasn’t the first founding E Street Band member to pass; that was keyboardist Danny Federici in 2008. But the Big Man was more crucial to Springsteen’s identity than anyone — the Born to Run cover image of them is as indelible as any in the history of the medium, their sliding soul-kiss during “Rosalita” was classic-rock’s punkest, warmest, long-running arena-hokum gag, and that sound is just that sound. So when Clemons’ bleating sax makes its lone and final star turn in “Land of Hope and Dreams,” a song that’s been kicking around since 1999, the solo is both a comfort and a gut-punch. This is hardly the first Springsteen album on which Clemons wasn’t a factor, yet his absence feels like a tongue in the groove of a just-pulled tooth. 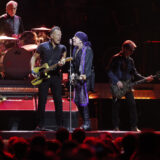 The closest Springsteen has come in recent years to the edge of this particular abyss was “Terry’s Song,” Magic‘s album-closing hidden-track eulogy for his friend Terry Magovern. By contrast, the last song on Wrecking Ball is the “Ring of Fire”-like “We Are Alive,” which honors the spirit, and spirits, of railway workers, civil rights activists, illegal immigrants, and other courageous nation-building types who never made it out onstage with Bruce Springsteen several hundred times. (The liner notes do feature an excerpt from Springsteen’s heartbreaking and hilarious speech from Clemons’ memorial.)

It would be reckless, uninformed armchair psychology to suggest that Springsteen surrounded himself with less familiar collaborators and entertained more experimentation to help cushion the blow, for himself and for his audience. But given the place that his partnership with Clemons holds in the collective rock consciousness, it’s also hard to resist. If one man’s way of dealing with profound personal loss is to channel his anger at the country for turning its back on the people who built it, then, great, and certainly Bruce Springsteen has too much left in the tank to dive into American Recordings mode. But don’t worry about us, man, we’ll be all right. How are you?