In 1992, conservative commentator and failed presidential candidate Pat Buchanan fired up the Republican convention with a speech warning of a “cultural war.” He slammed the Democrats as the party that favored abortion rights, full equality for women, and the “homosexual rights movement.” Liberal columnist Molly Ivins said at the time his remarks “probably sounded better in the original German.” The speech has drawn notice again recently, because views that were controversial among Republicans at the time are now enshrined in the party platform.

Rep. Paul Ryan, current GOP presidential nominee Mitt Romney’s running mate, was only 22 years old when Buchanan gave that speech. The Wisconsin Republican, who chairs the House budget committee, mostly shied away from cultural issues in his own remarks last night at the party convention in Tampa, though he did refer to the former Massachusetts governor as “a defender of marriage.” But aside from a fresh face, rock-hard abs, and a smoother tone, Ryan made clear there’s another difference between him and a previous generation of conservatives: He listens to hard rock.

Ryan even chided the guy at the top of the ticket about their evidently divergent music tastes. “There are the songs on [Romney’s] iPod, which I’ve heard on the campaign bus and on many hotel elevators,” Ryan told the convention. “He actually urged me to play some of these songs at campaign rallies. I said, I hope it’s not a deal-breaker Mitt, but my playlist starts with AC/DC, and ends with Zeppelin.” So there you have it: Macho white rock bands from the ’60s and ’70s, the taste of a new generation. (And as many on Twitter pointed out last night, “Zeppelin” would only take Ryan to the “L” section of his iPod.) 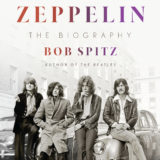 Much love to AC/DC or Led Zeppelin, but neither band should signify youth or hipness in an even halfway rational world. To be sure, they’re an abrupt change from the tastes of a guy like Buchanan, who once slammed “music that extols social chaos.” But Zep’s Jimmy Page is three years older than Romney. All of those two bands’ original members would be at or approaching the age for Social Security, which Ryan proposed turning into a 401(k)-like arrangement right before everyone’s 401(k)s went bust in the financial crisis. And have you seen the charts lately? The kids aren’t exactly listening to loud guitar bands in our contemporary era, and, y’know, they’re all right.

The comments come amid an election-season divvying up of musical supporters. Devo and Ry Cooder have written songs inspired by the story of Mitt Romney’s late family dog, Seamus, who reportedly made a 12-hour trip from Boston to Ontario in a dog carrier on the roof of the car. Foo Fighters — and, um, Jack Johnson, Asher Roth, and Motion City Soundtrack — are set to play a fundraiser for President Obama during next week’s Democratic convention, while the National and Chris Cornell are playing another Obama event on September 1. The incumbent has also reached out to DJs, and of course, he has sung Al Green, given Bob Dylan a medal, and, you know, actually acknowledged African-American recording artists exist, albeit sometimes clumsily. The Republicans, for their part, have Kid Rock, 3 Doors Down, and Taylor Hicks, among others. Romney says he likes the Killers, and the Vegas band are trying to stay out of it (“Anyone’s allowed to like us,” bassist Mark Stoermer told Rolling Stone).

This isn’t Ryan’s first time un-self-awarely discussing his controversially pro-rockin’ stance as if it somehow makes him up-to-date anywhere other than in the town from Footloose or a darkened room with 79-year-old casino magnate Sheldon Adelson, who has pledged up to $100 million to defeat Obama. After Ryan listed Rage Against the Machine among his favorite bands (along with the Grateful Dead, Metallica, and more), the vocally left-wing band’s guitarist Tom Morello shot back that the vice-presidential candidate is the “embodiment of the machine that our music has been raging against for two decades.” More recently, Twisted Sister’s Dee Snider decried Ryan’s use of his band’s 1984 anthem “We’re Not Gonna Take It.”

What’s really laughable, though, isn’t that the rockers Ryan loves often turn out to be liberals in real life. Music is music, after all. No, what’s bizarre is that Ryan is as far to the right on many social issues as Buchanan and his heirs — including Missouri Rep. Todd Akin, who recently said women can’t pregnant from “legitimate rape” and who co-sponsored a bill with Ryan that would have given a fertilized egg the full rights of the woman who carries it. No less a hipster than Newt Gingrich infamously called Ryan’s budget proposal “right-wing social engineering.”

What’s surprising about a guy who’s stuck in the past listening to music that’s decades old? Just because it’s from before some of us were born instead of from the Paleolithic era isn’t much of an improvement. As a band Ryan might’ve heard of would say: Meet the new boss, the same as the old boss, in that neither knows what we mean we say “Bawse.” What’s “LMFAO” in German?