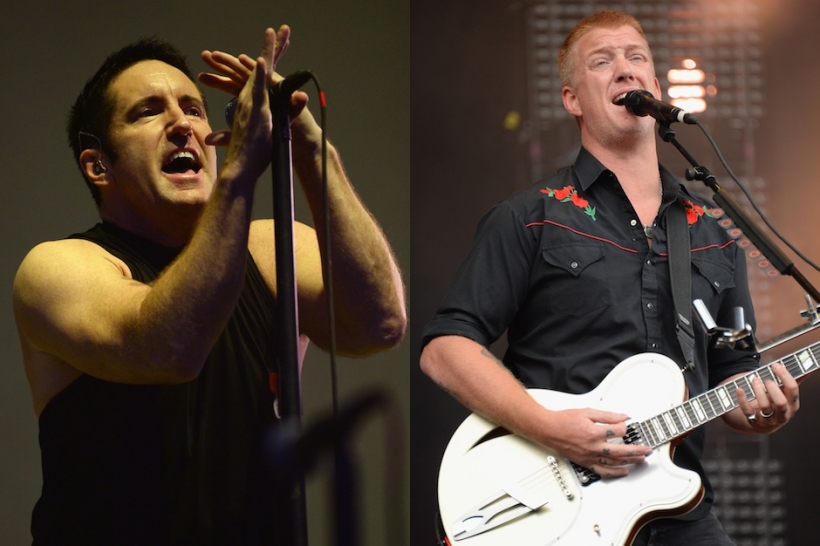 Nine Inch Nails and Queens of the Stone Age are touring together this month as double headliners in Australia and New Zealand, and they’d like to see other bands do something similar back home. Recent SPIN cover subjects Trent Reznor and Josh Homme called for more co-headlining tours in a joint interview today on Australia’s Triple J Radio (listen below).

“For the last few years I’ve been asking why don’t bands co-headline together, why don’t they do something? asked Homme, saying the tours could be a way to build community outside of festivals. “I have to be confident in my own band, because it’s not easy to play with these guys,” Reznor added. Homme, with a laugh: “We’ve gotta throw down, or someone’s gonna get hurt.”

Reznor and Homme, whose bands will determine each night’s proper headliner through a coin toss, said at least for now they aren’t planning a do-over of their F-bomb-inducing Grammy collaboration, though they left open the possibility (“Let’s just start by everyone kicking their ass and doing their thing,” Homme said). Meanwhile, Reznor reiterated that NIN’s sets will be much different from their other recent shows in support of last year’s Hesitation Marks, saying they’ll be “off-the-cuff” and unpredictable.

The two frontmen also discussed Reznor’s Beats Music involvement, how Arctic Monkeys’ Alex Turner helped inspire a song on QOTSA’s 2013 …Like Clockwork, and more. For instance, is Reznor collaborating with Deadmau5 next year? Trent: “No.” Josh: “He just had a rodent problem at his house.”

Catch up on SPIN’s exclusive NIN and QOTSA coverage: