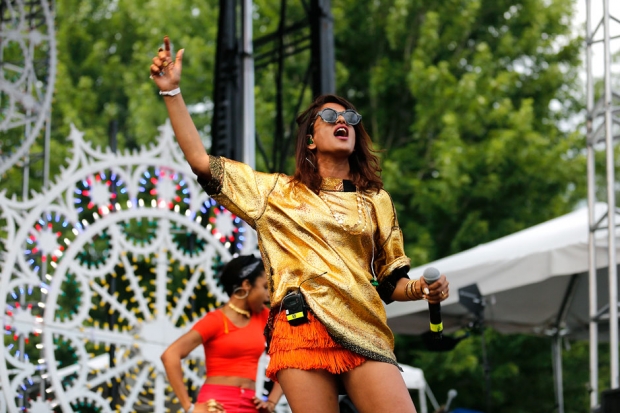 M.I.A. wasn’t kidding. The Sri Lankan musical polyglot shared a 90-second preview of new song “Come Walk With Me” late last week, and as the clip hinted, the full song is one of the most purely pop that she has ever released. Likely appearing on November 5 album Matangi, the track doesn’t match up perfectly with previous M.I.A. standouts: It isn’t as effortlessly huge as “Paper Planes,” as radio-ready as “XXXO,” or as club-driven as “Bad Girls.” But with its prominent handclaps and chest-puffed lyrics — “There is nothing that can touch me now / You can’t even break me down” — the song almost works as Maya’s answer to the inspirational montage-music of Katy Perry’s “Roar.”

Of course, there are some purposeful tweaks: M.I.A.’s untreated and off-kilter singing, plus a buzzing breakdown after the first chorus that incorporates the popping sound effect you hear when you increase or decrease the volume on a Mac. But even the beat switch-up isn’t anywhere near as jarring as much of Maya’s recent music, and the track’s dancehall-thwack won’t sound especially foreign to anyone who has seen Major Lazer play to tens of thousands at a summer festival.

M.I.A. previewed Matangi in Queens late last year. A number of tracks potentially headed for the album have surfaced, such as “Unbreak My Mixtape,” “Only 1 U,” “Bring the Noize,” “Doobie,” and “AtTENTion.”