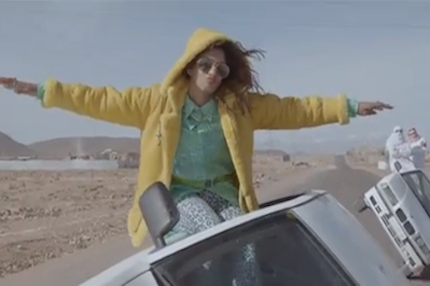 Thematically, “Bad Girls” belongs in the same wheelhouse as Beyoncé’s “Run the World (Girls),” both in its feminist bent and desert setting. The two “Girls” both go for a sense of exoticism and globalized togetherness — though why it always seems to be a desert and not a bustling southeast Asian metropolis or a south American rainforest community, we may never know. But beyond their surface similarities (big explosions, big emphasis on the girls), these two clips veer off in different directions. Bey’s ladies attack a hyper-aggro SWAT team in nothing but bustiers and garter belts with their devastating booty-popping; M.I.A.’s clip features presumably Muslim women traditionally clothed from head to toe drag racing through the desert as men look on. Maya may be rapping about ladies’ sexual dominance over men, but her clip is chaste — we’re oohing and ahhing over car tricks, not hard bodies. Her girls are getting it done with skill rather than sexy.

“It was dope to have so many people from so many different backgrounds speaking so many different languages come together to create something that we believed in,” M.I.A said in a statement. “I thought I was gonna die on the shoot when I saw the drifting. It was a four-day shoot so everyone was on edge the whole time specifically me when I had to do bluesteel singing to the camera while the cars did doughnuts on the wet road ten feet away. In my mind I was thinking how I was gonna deliver the video to Vice with no legs.”

According to Noisey’s description of the video, M.I.A. will be posting video responses on February 10 to fans who leave the best comments on its YouTube page.

After all these years, still don’t understand M.I.A.? We’ve got you covered.