Madonna performed last night at Eurovision 2019, despite recent calls to boycott the event due to its location in Tel Aviv, Israel. Palestinian organizers, human rights activists, and other advocacy groups sparked a widespread international effort to boycott the event, with artists like Pink Floyd‘s Roger Waters encouraging Madonna to reconsider the performance.

Nevertheless, the show proceeded as planned, with Madonna performing songs like “Future” and “Like A Prayer” during her set. Taking the stage at the beginning of the night, she acknowledged the controversy of the performance, offering a few vaguely political words to the audience. “Let’s never underestimate the power of music to bring people together,” she said. For her new song “Future,” the queen of pop brought out Migos rapper Quavo to join her for the song, which they performed in front of a projection with the phrase “WAKE UP.” During the performance, two backing dancers briefly appeared on stage with the Israeli and Palestinian flags on their backs.

In a statement addressing the performance, the Palestinian Campaign For The Academic And Cultural Boycott of Israel (PACBI) called the performance “immoral” in the face of legitimate human rights abuses. “At a time when fewer and fewer major artists are performing in apartheid Tel Aviv, Eurovision is exactly what Israel’s far-right government needs to distract from its crimes. Artwashing Israel’s brutal oppression of Palestinians for a million dollars must be among the most immoral political agendas.”

The European Broadcasting Union also addressed the incident, saying that Eurovision is not a political event, and that event organizers had no knowledge of Madonna’s use of the Israli and Palestinian flags prior to the performance. “This element of the performance was not cleared with the EBU and the Host Broadcaster, KAN,” they shared in a statement. “The Eurovision Song Contest is a non-political event and Madonna had been made aware of this.” 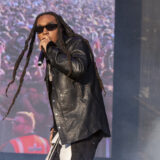 "Let's never underestimate the power of music to bring people together" – @Madonna, at the Grand Final of the Eurovision Song Contest 2019.#DareToDream #Eurovision pic.twitter.com/18RF5r0Kq3