What we learned this week: Festival season is still in full swing. Dear and the Headlights have something to "Talk About." And more. 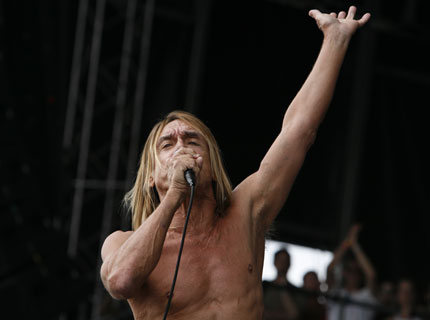 When the sun sets in New York City these days, and the constant flow of perspiration stops just momentarily, what resembles a cool breeze just might roll through hinting at the season ahead. But don’t be fooled: This summer’s festival circuit is in full swing and SPIN.com has the highlights from last weekend’s full-on blitz of Virgin Mobile Fest, All Points West, New American Music Union, and the Seattle Tattoo Expo to prove it. And while you peruse live video performances, photos, reviews and more from each festival,check out other goodies from the last week, including a fiery new track from Phoenix’s Dear and the Highlights. And that’s just the beginning…

What we learned from all of the summer festivals: The options are plentiful for seeing scores of your favorite bands outside in cities across the U.S. But instead of choosing one, SPIN.com went for three, capturing video of Foo Fighters, Paramore, and Stone Temple Pilots at Baltimore’s Virgin Festival while also managing to make an appearance at Pittsburgh’s New American Union Festival and New Jersey’s All Points West. Meanwhile, our trusty Pearl Jam blogger Zack Newman hit up the Seattle Tattoo Expo to catch up with former Guns ‘N Roses bassist Duff McKagan and Pearl Jam’s Mike McCready.

What we learned from Dear and the Headlights: Songs about “isolation, bitterness, and occasional violence” sound great. Phoenix, AZ’s rock quintet previewed their LP Drunk Like Bible Times with the MP3 for “Talk About”, a punishing and angry number.

NEWS:
– Radiohead, Buzzcocks, My Morning Jacket Featured on ‘Choke’ Soundtrack
“The movie adaptation of the Chuck Palahniuk novel will also feature tunes from Death Cab for Cutie, Clap Your Hands Say Yeah, Ben Kweller, and many more.”
— Death Cab for Cutie Plan Short Fall Tour
“Seattle’s indie mainstays announce several headlining dates in October following their hometown appearance at the Bumbershoot Music and Arts Festival.”
– Metallica Reveal an Extensive North American Tour
“The hard rock luminaries hit the road with their tenth album to date, Death Magnetic, and tap an equally shrapnel-shredding act to open: The Sword.”
– Gym Class Heroes Map Fall Tour
“In support of their forthcoming new record, entitled The Quilt, the hip-hop and indie-pop crew plan a lengthy U.S. jaunt with the Roots.”
– Yeasayer Announce Fall Tour
“The experimental psych-rockers will embark on a North American jaunt before returning to the studio to record the follow-up to All Hour Cymbals.”