During their second Chicago date, PJ showed the difference between being very good and truly great. 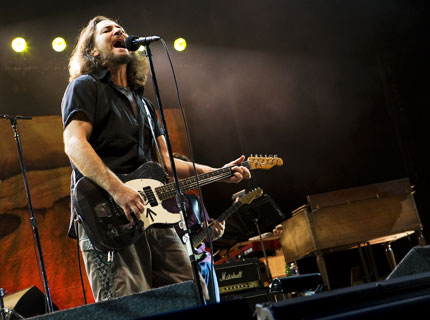 Let’s start with the stats: On their second of two nights at Chicago’s United Center Monday, Pearl Jam played 29 songs versus the previous night’s 27, and repeated just eight. They played one Who cover instead of two(“The Real Me”), a different Neil Young song than the night before(“Fuckin’ Up” instead of “The Needle and the Damage Done”), and ended the show in exactly the same way, with a medley of “Yellow Ledbetter” and a guitar-shredding “Star-Spangled Banner” delivered by Mike McCready channeling Jimi Hendrix.

But it’s not facts and figures that separate a very, very good show like Sunday night’s from a truly great one like Monday’s: It’s partly song selection, partly the energy of band and audience, and partly that intangible chemistry that happens when those things synthesize.It’s in the surprise of remembering what shockingly good songs”Whipping” and “Present Tense” are — and remembering that they exist at all. It’s in the realization that a track as ubiquitous and overplayed as “Alive” has survived for a reason.

More than anything, though, separating good from great comes down to how much fun Pearl Jam is having, and Monday seemed like the time of the bandmember’s lives — no small feat considering they should be at the stage in their careers where they have assistants deliver messages between them. (“Eddie asks that you keep the solos under threeminutes tonight, Mike, and in return he promises not to dance too close to your amp.”) But the band that nearly tore itself apart after suffering from fame-itis now loves the stage morethan anyone. If playing has in any way become work, they’re great at hiding it.

So when drummer Matt Cameron took what seemed like an unplanned solo during “Evenflow,” it made bassist Jeff Ament giggle. When “Do the Evolution” got heated, Vedder and Ament staged a playful shoving match.

The band dropped bits of Pink Floyd and Sleater-Kinney songs into their own. Vedder took a fright wig from an audience member and carefully placed it on his head for half of a song.

And when the family of Iraq War veteran Tomas Young — subject of the documentary Body ofWar, for which Vedder wrote some music — showed up, there was plenty ofroom in the set for their request: a powerfully spare reading of “NoMore.” “When a soldier asks you to play this song, you play the fucking song,” laughed Vedder — then apologized to Young’s little brother for swearing.

The show was all celebration.

Before second-encore starter “LifeWasted,” Vedder big-upped his former hometown and its current most- famous son (that’d be President Obama). He left the entire first verse of “Betterman” to the crowd, who delivered it with relish. He carefully passed his wine bottle to the first couple of rows during acover of Victoria Williams’ “Crazy Mary,” whose chorus goes, “Take abottle / drink it down / Pass it around.” And he dedicated “Fuckin’ Up” to his pal, former Michael Jordan-era Chicago Bull Dennis Rodman, saying with what seemed like genuineawe: “A lot of amazing shit happened in this room.”

Chicago Night 2 Setlist:Hard to Imagine
Corduroy
In My Tree
Last Exit
All Night
Nothingman
Fixer
Evenflow
Present Tense
Whipping
Not For You
Daughter
Brother
Gone
Got Some
Do the Evolution
Alive

No More
Comatose
Grievance
Black
The Real Me
Porch

Josh Modell
Tags: pearl jam, We Were There