New Dear and the Headlights MP3: “Talk About” 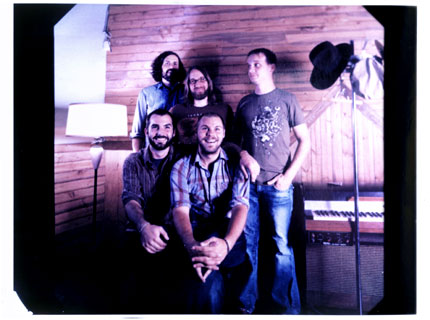 When “Talk About,” a track off Dear and the Headlights’ sophomore set Drunk Like Bible Times (out Sept. 30 via Equal Vision), landed in our inbox a few weeks ago, it was as if we’d been hit by an anvil dropped from atop the Empire State Building. And with its wall of swirling, crashing guitars intertwined with steam-engine keys and, notably, frontman Ian Metzger’s ballooning diatribes on domestic violence, AA meetings, and sensory overload, the track begged further investigation.

“‘Talk About,’ lyrically, is a song I wrote with my good friend Derek Sperry over the course of about 40 to 50 hours,” Metzger told SPIN.com. “The song is a detailed account of the disagreement between two very intertwined and opposing existences. It deals heavily with the isolation, bitterness, and occasional violence felt in something as simple as an argument or difference in opinion.”

And the emotional sentiment delivers: The ironically upbeat, sonically seam-busting tangles only accentuate Metzger’s snarling, quick-tongued observations. “We just wanted to come up with the most ridiculous and exaggerated metaphors of some lowly human interaction,” he continued. Mission accomplished.

Now Hear This: Dear and the Headlights, “Talk About”(DOWNLOAD MP3)