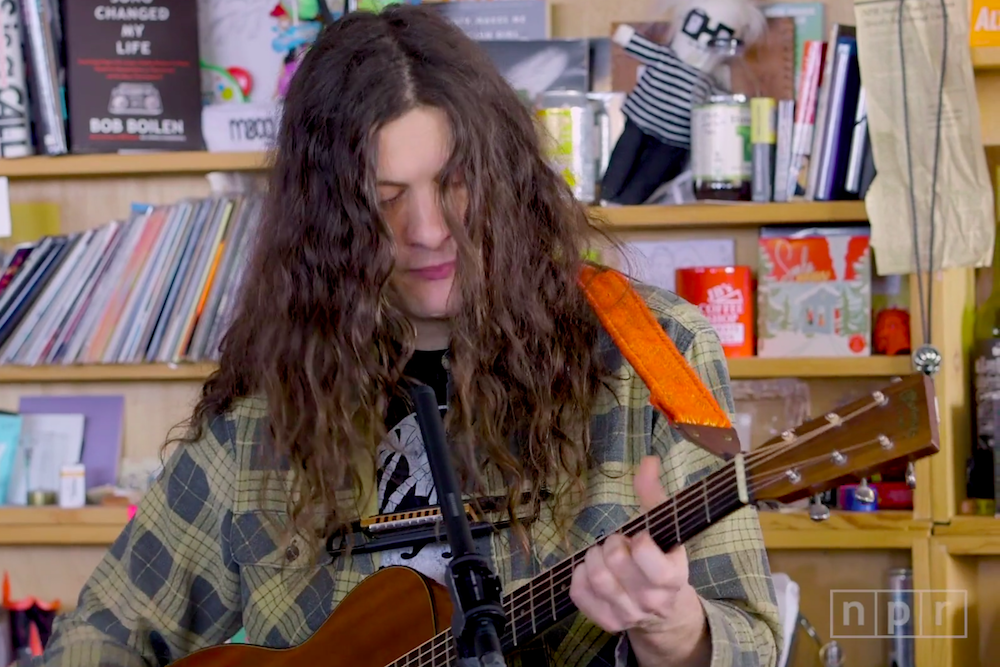 Some nonchalantly gorgeous songs, a few strands of hair hanging in the face, a guy playing basslines on an electric guitar, a couple good quips about Johns Lennon and Popper: you get all this and more from Kurt Vile’s new Tiny Desk Concert appearance.

Philly’s king of cool performed two new songs and one old one for NPR’s long-running live video series: “Backasswards” and “Loading Zones” (which Vile cheekily introduced as “A Working Class Hero Is Something To Be”) from last year’s great Bottle It In, and “Peeping Tomboy” from 2011’s equally excellent Smoke Ring for My Halo. You may also recognize the latter tune from 2017’s Lotta Sea Lice, Vile’s duo album with Courtney Barnett, which had Barnett covering it (and Vile covering Barnett’s “Out of the Woodwork). The performance is stripped down, as is the Tiny Desk custom, with Vile performing solo and accompanied by drum machine and electric guitar. But he brings his usual charm, cheekily nodding to Lennon’s “Working Class Hero” at the beginning of “Loading Zones” and claiming that his harmonica playing would give Blues Traveler frontman Popper “a run for his money, as usual.”

Recently, Vile has released the standalone single “Timing Is Everything (And I’m Falling Behind),” covered Tom Petty’s “Learning to Fly,” and appeared on Barack Obama’s list of his favorite music from 2018. He released Bottle It In, his seventh solo album, in October 2018. Read “There’s Something Funny About Kurt Vile,” Spin’s cover story from that month, here, and watch the Tiny Desk performance below.