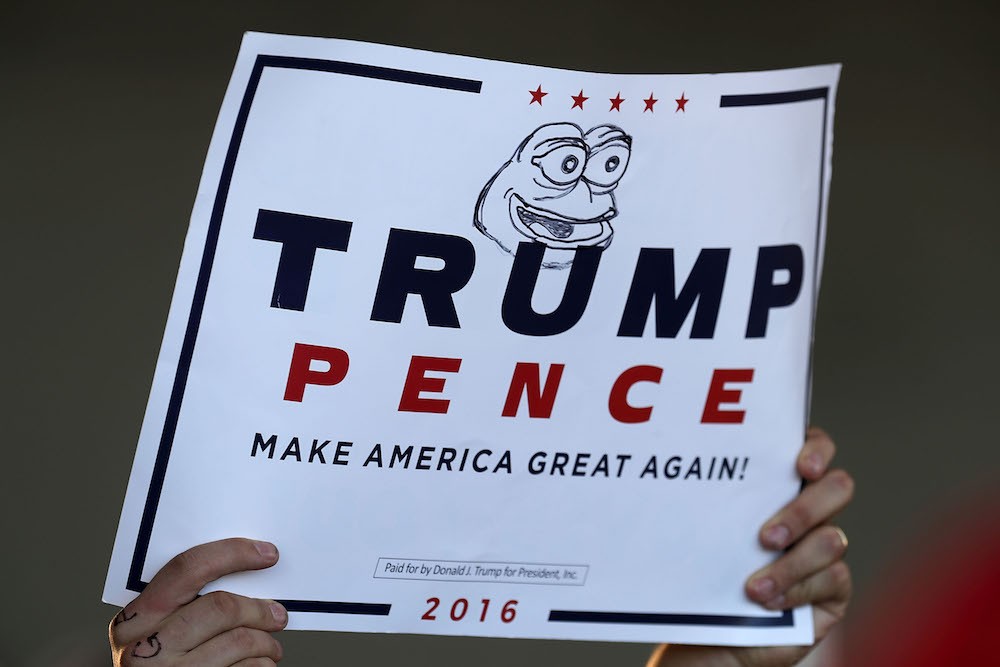 Yesterday, the Republican-controlled House of Representatives passed a bill that will kill the Federal Communications Commission’s rules preventing internet service providers from selling users’ browsing data to advertisers and other third parties. Donald Trump’s White House has indicated that it intends to sign the bill into law, a move that will drastically roll back the privacy rights of ordinary people on the internet. If the armies of anonymous right-wing trolls who helped propel the president to victory aren’t second-guessing their Trump support right about now, they really should be.

During the presidential campaign, anonymous internet forums like Reddit, 4chan and 8chan, and the dingiest corners of Twitter emerged as major hubs for Trump supporters. “I’m fucking trembling out of excitement brahs,”one user of 4chan’s nihilistic right-wing politics board /pol/ proclaimed after Trump’s victory. “We actually elected a meme as president.”

The only thing chan trolls care about as much as ethics in gaming journalism and securing a future for white children is access to an internet that’s unfettered by snooping corporate interlopers. The entire identity of a Trump-loving 4chan poster is wrapped up in the anonymity of the internet, and the ability to do whatever you want online without consequences, whether it’s telling elaborate inside jokes on message boards or harassing liberal journalists on Twitter. The elimination of the FCC’s Obama-era privacy protections is a major blow to the idea of a free and open internet.

The trolls probably should have seen this coming when Trump selected the outspoken net neutrality opponent Ajit Pai as FCC commissioner, who voted against the privacy rules when he was a humble commission member. Still, they’ve spent the 12 hours since the news of the rollback broke in a state of apoplectic anxiety. The current top post on Reddit’s popular The_Donald board reads “Let’s discuss this ISP privacy bill.” All three of the top comments are Trump supporters who are against it. “I think there needs to be a new bill that introduces an all encompassing privacy protection,” a Redditor named StirlingG wrote. “I don’t like ISPs or websites selling my shit, and I don’t see any major positives to this.”

“Keep note: HUGE amounts of ‘former’ donald trump supporters shitposting,” a user named bloodfist45 observed, further down the post. “I believe they’ll only become former if Trump begins to vote on stuff like this,” another Redditor responded. “This bill is anti American. Data collection on massive levels is anti-american.”

Some responses were less measured. “I’m hopeful that Trump will veto the fuck out of this bill,” user 51Bootwearer wrote. (Just to reiterate: He’s not going to veto the bill.) “ARE YOU FUCKING KIDDING ME?” jdovejr echoed. “VETO THIS SHIT NOW.”

The internet’s other Trump hubs are no happier. “Where were you when Trump sided with corporations and government over the American people?” asks a post on /pol/ from this morning. “This is one of very few Obama-era regulations that should have stayed,” reads the top comment on Breitbart’s news story about the bill, which characterizes the privacy rules as “big government” overreach. “This is an attack against freedom,” another commenter responded. “I want to make my own decisions about my life, not others, and that includes my private info as well. this is total bs, the house giving in to the business “establishment”, Pres Trump should stop this!!!!!”

Incidentally, the episode is a useful cautionary tale for impressionable young Trump supporters about the Republican Party’s conflation of free-market corporatism and individual liberty in general. When you deregulate industries, it’s not the common man who enjoys new freedoms. It’s the people and organizations who already have lots of money and power–in this case, the ISPs. And when those people in power are given an opportunity to further exploit the common people who rely on them for essential services in exchange for a little more money, they’ll always take it. Take note, Twitter eggs and Reddit Pepes: it’s as true of healthcare and finance as it is of the internet.