The New Year’s Eve hangover has (hopefully) passed, and now it’s time to survey the damage. Tons of musicians helped ring in 2014 with concerts all around the world, but only a handful of artists were present for the iconic ball drop in Times Square. Miley Cyrus, Icona Pop, Macklemore & Ryan Lewis, and Blondie all took the stage in New York City for the zombified version of Dick Clark’s New Year’s Rockin’ Eve, now helmed by Ryan Seacrest, and we’ve collected video footage of the showcase for those who missed (or simply can’t remember) the telecast.

Miley offered a Bangerz double-header, performing “#Getitright” and “Wrecking Ball,” one of SPIN’s 50 Best Songs of 2013. Icona Pop, meanwhile, bounded through a medley featuring “All Night,” “Just Another Night,” and, of course, their irrepressible “I Love It.” Macklemore & Ryan Lewis once again returned to “Thrift Shop” and “Can’t Hold Us,” while Blondie dusted off classic tracks “One Way or Another” and “Call Me.” Down in Brooklyn, Billy Joel kept the Baby Boomer set satisfied: the Piano Man played a concert at the Barclays Center and ABC aired his performance of “You May Be Right.”

Over on the West Coast, Robin Thicke contributed “Blurred Lines” to the annual TV special, and Fall Out Boy played a trio of songs from their Save Rock and Roll album: “My Songs Know What You Did in the Dark (Light Em Up),” “Alone Together,” and “Young Volcanoes.” Scroll down to watch all of the performances. 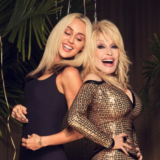