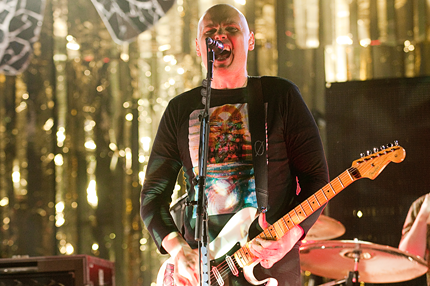 When he’s not busy venturing into the pro wrestling biz, Billy Corgan is digging around Smashing Pumpkins’ vaults and assembling reissues of the band’s entire catalog. All that hard work — on the reissue side, at least — is starting to pay off: On November 29, the Pumpkins and EMI will kick off the campaign with the band’s first two LPs, 1991’s Gish and 1993’s Siamese Dream, which will arrive with tons of never-before-heard rarities and other goodies.

The reissues, which were remastered for the first time from the original tapes by Bob Ludwig, will drop as a CD, deluxe 2-CD/DVD package, vinyl LP, and digital download. Deluxe versions of both reissues feature a bonus disc of rare and previously unreleased songs, and a never-before-released live concert from the Metro in Chicago on DVD (Gish comes with a 10-song set from August 25, 1990; on Siamese Dream it’s a a 17-song set from August 14, 1993).

Corgan and Co. recently hit the road on a fall tour — read SPIN’s review of their Los Angeles launch right here. They’re also preparing for the early 2012 release of the 13-track Oceania, which Corgan is calling “an album within an album” since it’s part of SP’s in-the-works 44-song effort Teargarden by Kaleidyscope.

All songs previously unreleased except where indicated.*