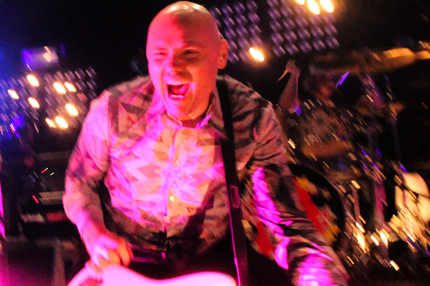 SP will be performing at Chicago’s Riviera Theatre tonight as part of a tour to promote ninth album Oceania, due in late November. But Corgan is also acting as creative director of the new firm Resistance Pro, he told FOX News Chicago. “We’re going to try to bring back to Chicago some of the glory days,” he said, drawing a contrast with the more “entertainment”-focused WWE. “We want to go back to a little more old-school kind of feel.” Resistance Pro’s first wrestling event takes place November 25 at Excalibur in Chicago; more information is on their website.

Corgan is no stranger to the world of wrestling. In fact, rock music and professional wrestling happen to have a lot in common, he tells Detroit News. “You have a very strong indie scene, and a lot of times guys and girls build up their names there, and when they try to go to the big leagues they get a lot of [grief] from fans saying, ‘You sold out,’ etc,” he says. “It’s totally the same thing as in music.” Also: Bob Mould. And that time Corgan was attacked onstage by a crew of Mexican wrestlers. Now it’s only a matter of days before James Iha smashes his former bandmate over the head with a chair.

Fans disappointed by some of Corgan’s antics during his band’s most recent tour have wrestling to blame. He has at times played the wrestling role known as the “heel,” as opposed to the good guy or “babyface,” he acknowledges to Detroit News, saying audiences “just aren’t sophisticated enough to know that I’m playing around.” But this time he isn’t playing, he says: “That guy’s been put to bed. I’m babyface from now on.” Still waiting for Oceania’s Eric Clapton collaboration.