The frontman rolls out new online service with demo of 1992 classic "Drown," and promises "so much free stuff" in the future. 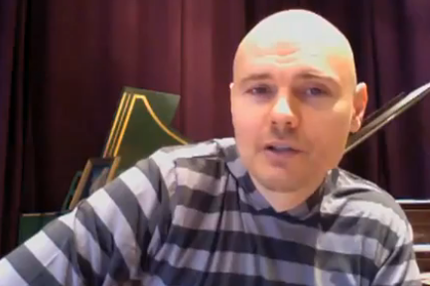 In the midst of recording Smashing Pumpkins’ Oceania album and prepping for a fall tour, Billy Corgan has another project in the works: a record club, dubbed SPRC, which will roll out Pumpkins’ rarities online. Corgan announced the project in a video posted on the band’s YouTube channel, which you can watch below. He’s kicked off the service with an early version of their 1992 track “Drown” and a two-track demo of “Geek U.S.A.”, which are available in exchange for an email (via Hipsters United).

Corgan promises “so much free stuff” to be uploaded soon. He recently discovered more than two hours of demos from their 1991 debut Gish and about six hours of Siamese Dream-related material. “You hear all sorts of things: rough vocals that weren’t used, songs before they had particular lyrics, it’s really interesting, even for me, to listen through chronologically, because you can really hear some of the progression,” Corgan says. “So we may be offering those as sort of audio documentaries, possibly with or without commentary, so we’re exploring those options.”

Corgan also added that Oceania will most likely see a release in November, and the band will premiere new tunes on their fall tour, which kicks off on October 5 in Los Angeles. “I’m halfway through the singing at least,” he said of the recording process. “I’ve got maybe five more songs to go on the singing, so we’re getting pretty close. We start mixing September 1. We hope that the music will start to be available to be heard somewhere in the November area. We’re working out those details now.”