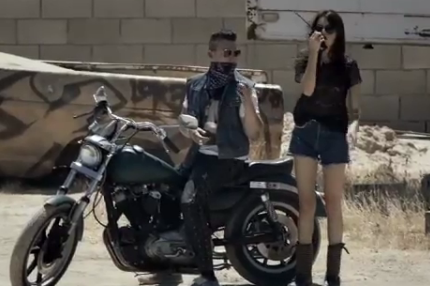 Last month, Arctic Monkeys released the video for the title track from their fourth album, Suck It and See, which stars drummer (and Diddy BFF) Matt Helders as a gun-toting biker guy with a girlfriend who has a penchant for undressing. The recent SPIN cover stars return to what look like outtakes from that effort in the just-unveiled video for new song “Evil Twin,” which will appear as the B-side to the “Suck It and See” U.K. single (due out on October 31).

The song sees Arctic Monkeys in the fuzzy, groove-oriented mode that recalls their previous work with Queens of the Stone Age’s Josh Homme, while the video itself — again directed by Neon Indian, Morning Benders, and Girls associates Focus Creeps — has more of Helders’ evil twin, and a bit more of his lady pal than some employers might like to see. “Your love’s not what I need / So don’t give it to me,” frontman Alex Turner warns. Too bad Helders didn’t tell that to a certain young woman — y’know, before the whole biker-gang thing.