WATCH: The Brit indie rockers party down at the rap impresario's Miami mansion -- and film the whole hilarious encounter! 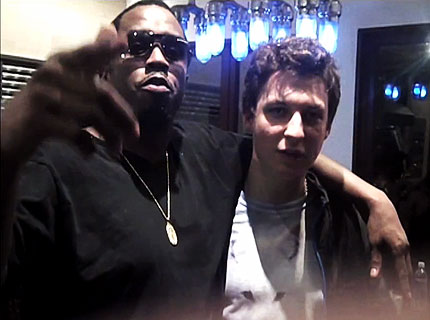 Listen up HBO execs: There’s a new Entourage in town — and it has the makings of a hit show!

P. Diddy has declared himself the fifth member of Brit indie rock outfit Arctic Monkeys, after partying down and forming a bromance with the lads during a house party at his Miami mansion.

The best part? The whole thing was captured on film. Watch below.

It all started when Monkeys drummer Matt Helders took a break from recording the band’s new album in Brooklyn to go on vacation in Miami, where he stopped by Diddy’s pad and the rapper promptly added himself to the Monkeys lineup: “Now I’m not going to be singing. I’m not going to be playing any instruments, but I am part of the crew,” said Diddy. “I’m part of the entourage. So if y’all fuck with the Arctic Monkeys then y’all got to fuck with me.”

He also apparently wants to be part of the management: “Arctic Monkeys are now going to be on Bad Boy in America,” Diddy declared. “You know we don’t need the money. We’re just going to do this. It’s already a done deal.”

To sweeten said deal, Diddy invited Helders to fondle his Grammy. “When y’all on Bad Boy, y’all win. Look, feel it, feel it. It’s the future of the Monkeys. Bad Boy U.S. Look what we do here,” Diddy said.

“When I met this guy it was like a dream come true,” said Diddy of Helders, adding that the feeling was mutual: “And he’s the biggest Puff Daddy fan in the world. We’re having a Bromance.”

We’ll file this one under “Didn’t See it Coming” — along with Billy Bob Thornton’s allergy to Oscar mentions and Jamie Foxx’s inexplicable hatred for Miley Cyrus’ gums.