WATCH: It's a Mafia-style tribute, featuring Harvey Keitel and LeBron James. Plus: Jay plays cards and gets a haircut! 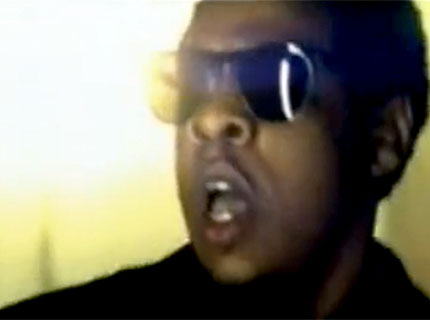 It’s one thing to announce the “Death Of Auto-Tune.” But it’s quite another to get Harvey Keitel and LeBron James involved.

Both the actor and basketball star appear in Jay-Z’s new music video for his tune “D.O.A.” — and it’s a Godfather-style tribute to the death of the vocal effect, complete with vintage limos, chauffeurs, Italian restaurants, and card games.

The clip opens with the rapper being chauffeured by Warner Music Group head Lyor Cohen, who drops him off in a dark alley and offers a salute. (It seems fair to assume that a man in Cohen’s position doesn’t usually pull taxi duty — time’s are tough for record labels, but not that tough — but it makes sense: Jay-Z is releasing Blueprint 3 via his Roc Nation label, which is through Warner subsidiary Atlantic).

The rapper then enters an abandoned warehouse, turns on the lights, and gets down to the business of burying Auto-Tune. Wearing all black and crossing himself before his proposed “moment of silence,” Jay-Z is soon backed-up by a live band.

Later, after cutting to a shot of a blinged-out Auto-Tune gold chain exploding, the action resumes with Jay sitting down for a Mafia-style dinner at an Italian restaurant, where he’s come to meet Keitel. They adjourn to the kitchen to play cards with a selective group including the restaurant’s chef, who Jay chides for offering up five and one-dollar bills, saying, “This is not a strip club.”

Jay even finds time to blow off a little steam by playing some one-on-one with NBA MVP James. And the grand finale comes with Jay getting his hair shorn (perhaps to signify that the grieving period is over?)

The video was aired as part of the BET Awards post-show.