"This is a grave situation we're in ... This is no time for me to worry about my unvarnished thoughts" 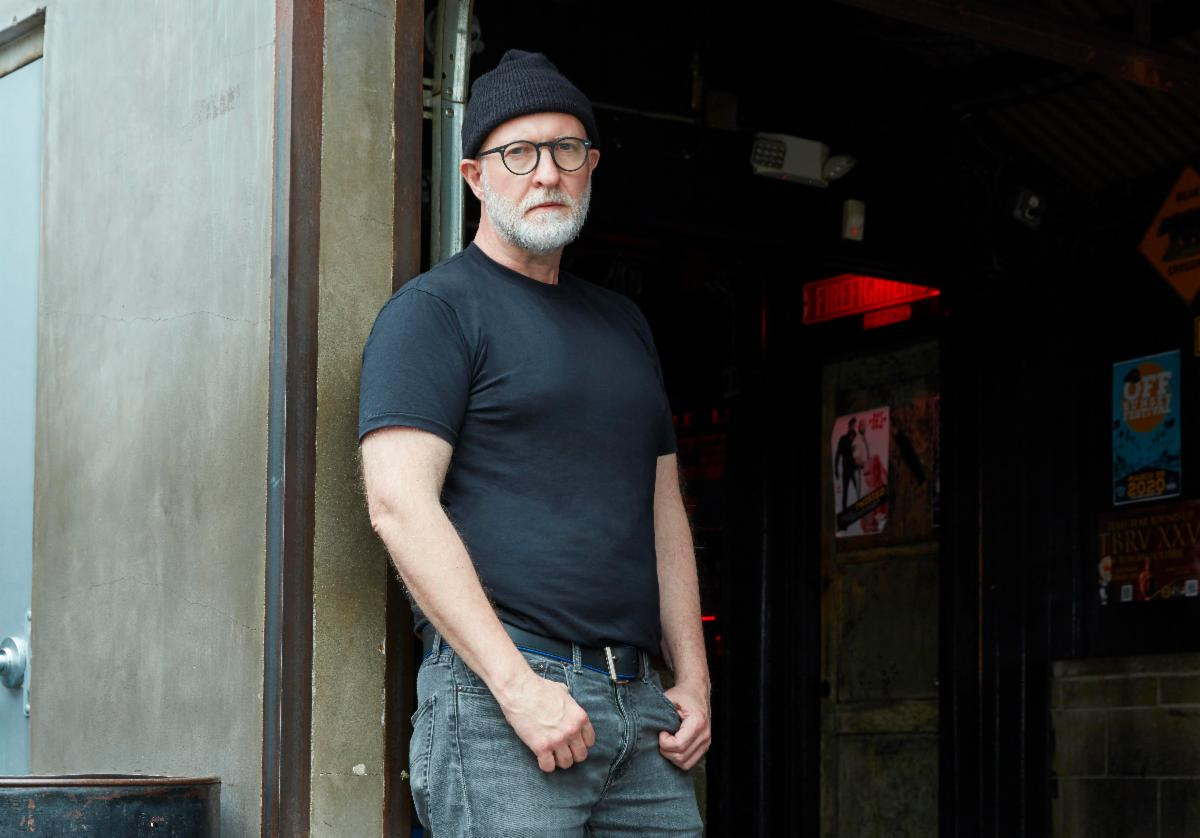 Bob Mould is no longer holding back on speaking his truth, however painful and inconvenient it might seem to some.

On his latest album, Blue Hearts, the songwriter matter-of-factly expresses his outrage at the injustices in America, including  the continued trampling of the rights of his LGBTQ+ community and other marginalized minority groups.

“All I have to do is wake up in the morning and take a look at what’s happened while I was sleeping — that’s enough to scare me every day into saying something,” Mould tells SPIN.

His outrage is especially potent on single “American Crisis.” He wrote the song two years ago during the sessions for his previous album, 2019’s Sunshine Rock, but decided it was too dark to fit that project’s more optimistic outlook. However, the track felt too relevant to pass over again.

“American Crisis” reminded him of being a young musician trying to figure out his identity in the early ‘80s. While not normally one for nostalgia, Mould has been in a particularly reflective state: He recently helped compile the 24-CD box set Distortion: 1989-2019 (out Oct. 2), which chronicles his 30-year post-Hüsker Dü career, including his work as a solo artist and a member of influential alt-rock band Sugar.

It’s a productive time for Mould, and he’s disappointed he won’t get to tour Blue Hearts until next year at earliest. “With Blue Hearts, I have not made a record that is so ready for the stage, probably since Sugar’s Beaster back in ’93,” he says.

SPIN recently talked with the songwriter about standing up for his rights on Blue Hearts and what he’s learned looking back at his career.

SPIN: What inspired “American Crisis,” and why was it time to revisit it for this album?
Mould: In September of last year, I was playing a lot of solo electric shows at festivals in Europe. So I’m playing a lot of electric guitar, and the thought came into my head that I had this sense of deja vu, that we’ve been here before [with] what’s going on. The fall of 2019 reminded me so much of the fall of 1983, and it made me take a moment to consider who I was back then, what was happening around me, why I was doing the work I was doing and the end result of that work.

And when I looked back, I saw a young gay man uncertain of his sexual preference, uncertain of his sexuality, being told by a televangelist president and a moral majority that I was less than and that I wasn’t really human because I was gay and because of a disease [AIDS] that the government couldn’t mention for five years. Those were the things that were informing my life back then.

It wasn’t really very comfortable, and it informed a lot of upset and a lot of…not fear, but a lot of not feeling like I could express myself fully back then. So to take that idea of a telegenic televangelist-type president and apply that forward to Trump, the similarities were pretty obvious to me, so that is where I started writing in earnest for this record Blue Hearts. And I also kept in mind a lot of the times in the 1980s where I did not say enough. I said things, spoke my mind, supported the cause, did what I could. But I wanted to make sure this time around that I did not have any of those concerns about saying too much or saying things that might cost me personally.

What’s going on in the world right now is that we are in peril; this is a grave situation that we’re in. And this is no time for me to worry about my unvarnished thoughts. This is the time to tell people exactly how I see the world and how concerned I am and what I think we all need to do to change the situation.

Has the fight for equal rights resonated more with you of late, given recent events?
Yeah. Unfortunately, it’s really shocking that it takes such brutality, such senseless murder, whether George Floyd, Breonna Taylor or [what happened] a number of days ago in Wisconsin — we should be better than this. This is 400 years of unfortunate history that this country has racked up, and we’ve never been really good at self-examination.

For the four years that I spent in Berlin, I was an outsider observing a history and a culture in a political system that for 75 years has been trying to reconcile a dark moment in their centuries of history. America has never had to do these things. And it’s a real shame: Over the past three years, somehow it seems the government has given undue power to police and immigration and Homeland security and demonizing people who are not exactly like them — and “them” would be described as “old white men with money and power that they don’t want to share with anyone.”

These acts should not happen in this day and age. The fact that things like this are still happening, that the people cannot have equal rights, that people cannot be treated equally — it’s nonsense. I think everyone should be guaranteed equal status under the law, in the eyes of our government. Anything less is not acceptable. And we have to make room for everybody in this country.

And you see the resistance growing; you see the Republicans getting more desperate. They’re adding more fuel to the fire; they’re creating more fear in people who are already overwhelmed with crisis after crisis, but we can’t continue this. So yeah, equality is very important. It’s always been important to me as a gay man. People of color have a much harder struggle than I do. So I am happy to shine whatever light I can on that problem right now, without diminishing my ongoing personal struggles for equality in the eyes of the law.

On “Forecast of Rain,” you used Donald Trump’s Access Hollywood quote of “when you’re a star, you can do what you want.” Why did you feel it was important to use it?
I thought it was a nice vehicle for forwarding that story, which is a story of simple questions pointed directly at the evangelical community. I was raised Catholic and went back to the church in the 2000s for a couple of years, trying to find a place for myself. I don’t have it in for religion, but I always have it in for hypocrisy. So that would be the hypocrisy upon which I wrote that song.

Again, I believe religion serves an important purpose in many people’s lives, but I do not appreciate the hypocrisy, especially when so much of it was pointed at me my entire life. I have to admit, I find a little bit of joy in [Trump’s] current misery because he certainly deserves it. He’s a hypocrite.

Why did you pick Blue Hearts as the title?
The first song is called “Heart on My Sleeve,” and the last song is called “The Ocean.” The original working title for the album was From the Heart to the Ocean, but I thought that was too many words. I shortened it down to Blue Hearts.

Thinking back on 1992, I was in a group called Sugar and put out an album called Copper Blue. To me, beyond it being my favorite color, in America blue denotes the Democratic party, and I am a Democrat. And in 1992, when I put out an album that had the word “blue” in the title, we ended up with a Democratic president. So call me superstitious — I thought I’d try again.

What surprised you most while compiling the new box set?
It had a big effect on me because when I write a song, I don’t listen to it after it’s been recorded. To go back and look at the words and music, all of those moments and those people that I write about and the places that I write those songs in and, just, all of it comes back to life.

The other thing that I noticed was all of us put way too many less-than-top-shelf songs on records when CD was the preferred format. I think all of us felt obliged to write 74 minutes of music, as opposed to writing two sides that were no longer than 18 minutes each. So I looked back at that stretch of time, and I’m like, “Wow, there’s a lot of extra minutes of music that, if it were 2020, I would get rid of.” I mean, look at Blue Hearts: How many songs have like long intros? A couple. They usually just start right out of the box at the first verse, and they end after the last chorus. There’s not a lot of extra doodads on this new record.

Why was your transition a solo artist an important step to take?
I’m very fortunate that [1989’s] Workbook was the record I made after leaving Hüsker Dü. It would have made no sense for me to leave a band like Hüsker Dü only to continue replicating a style that was those three people. I took the time in 1988 after Hüsker Dü ended to expand my skills as a guitarist, to expand my vocabulary as a writer and to look at different types of music for inspiration.

And I think that was a real pivotal moment in my life and in my work to reinvent myself and present myself as opposed to presenting another version of Hüsker Dü. It was a moment where I could grow, and I’m glad I took the time to dig in and do that work and get a bigger skill set to move forward.