It is just past noon on a cold winter New York City day and Sarah Barthel strolled into the cozy velvet confines of The Bowery Hotel lounge where guests and frozen passersby were thawing out. Right before she took a seat, Barthel stopped by a chicly dressed Pomeranian. She immediately needed to strike up a conversation with its owner and share photos of her own fur baby, Leroy.

While the two pet parents swapped stories, Phatnogram’s other half, Josh Carter, casually strolled in, ordered the hotel’s house juice and got comfortable. And as if there was a subliminal signal, Barthel returned to the couch and made herself comfy to talk about the band’s next chapter.

Phantogram’s Three has been deemed as one of the band’s most lauded projects to date.

Celebrated by critics and doing well on the charts, Three‘s success catapulted Barthel and Carter into an extensive touring schedule where they were able to encase themselves in a bubble — away from the feelings that were left from the loss of Barthel’s sister. 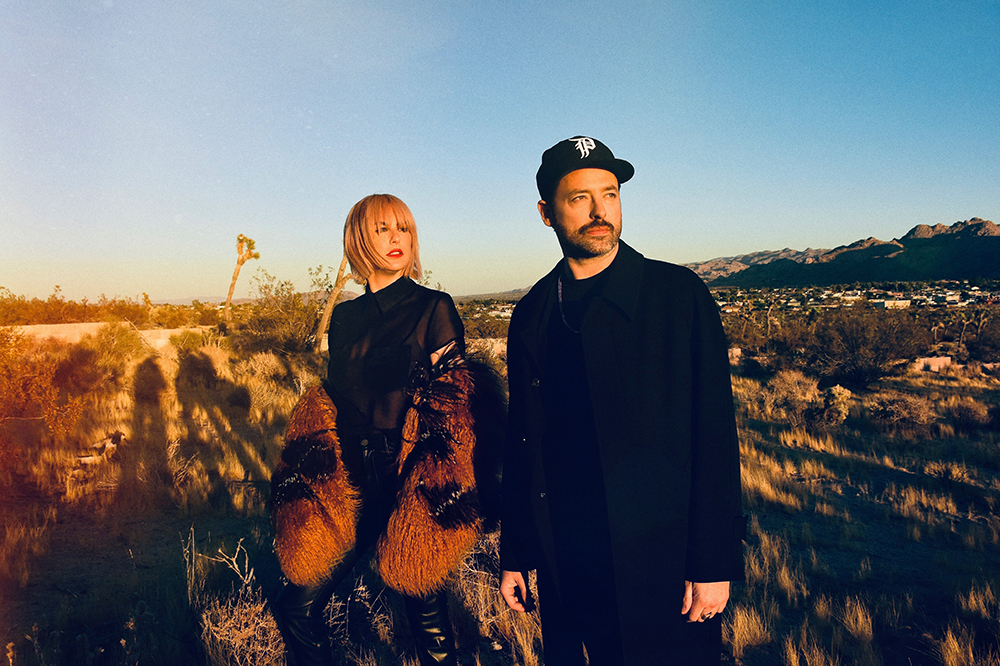 “Being in a band in general, you’re in a fucking bubble,” Barthel told SPIN. “You’re inside and everything’s going on. And then you get out of the bubble and you go home and you realize, you’re like, ‘Oh OK, this is what’s going on, and these things and this problem and this person.’ And all of our problems that I feel like, at times, were put on hold, come back.”

And with all those feelings, Ceremony was born.

“I think this album is not a part of the past,” Barthel said sitting cross-legged and looking down at her hands before taking a deep breath. “It’s all those experiences that were put on hold because of that crazy, fucking experience we had four years ago — a reflection not of Becky [but] living without Becky.”

For Carter, Ceremony was a way to get back to everyday life.

“I think we needed to go back to a life of normalcy and see what it was like to be a normal human being for a while,” he said. “We tour so much, you know what I mean? And so it’s like, just getting back to reality and being with friends and family and the realities of not having Becky in our lives and certain things being different. That’s a lot of what went into the making of the new album.”

Ceremony, which is out on March 6 via Republic Records, is Barthel and Carter’s next step toward Phantogram’s growth and evolution. Although parts of Three and 2014’s Voice were worked and reworked in Los Angeles, it wasn’t until Ceremony that the band moved their recording mainstay from Harmony Lodge in upstate New York to Barthel’s home studio that’s located in L.A.’s Laurel Canyon.

A creative mecca for Southern California rock music since the 60s, Laurel Canyon has given birth to hits by Joni Mitchell, John Lennon, The Byrds, Crosby, Stills, Nash & Young. And for Ceremony, Barthel’s studio, fondly called Harmony West, was the perfect place to give the band the studio vibes they felt in New York while allowing them to feel the neighborhood’s magic and create musical gems like “Dear God.”

Opening the new album, “Dear God,” not only explored different avenues of sound but also still stuck to their musical roots. Carter said that the instrumental grew from a sample he took from an old soul vinyl by a 1960s Ohio act but couldn’t recall the group’s name at the time. And the work on this track, which turned into “Dear God,” took longer than he ever expected.

“That was a beat that I started making five years before we started Phantogram,” Carter said. “It had that ’80s sort of pulsing, sort of walking bass in it. I added that and had written a top-line sort of hook. And we always wanted to work on [this song]. We just couldn’t find the right place for it in any other album. And I think it just came together in a nice way that still has darker undertones that Phantogram always kind of has.”

Despite sounding like a departure from the band’s signature sound, Barthel pointed out that it still emulates what Phantogram is known for — the blending of light and dark.

“It’s very similar to what Josh and I love to do well,” she said. “For example, ‘Mouthful of Diamonds,’ sonically, it’s hopeful and beautiful and more positive-sounding. But the lyrics are super dark. And that’s the same for this song. The lyrics for the chorus [and] the ideas started from that ‘Take me out of this world I’m living in,’ which is pretty dark. But we just kept adding those elements of sound. We juxtaposed the light and dark, which is what we do very well. We’ve wanting to use this and work on this song forever. And we did. It felt it was the right time.”

But for Phantogram purists, Ceremony offers up tracks that grow sonically as you move through the album like their first single, “Pedestal” and pulsing “Mister Impossible.” In the world of streaming, more and more people are favoring singles as opposed to listening to the whole album through.

“We’re always conscious of how to string together our songs,” Carter said. “And we are well aware in this day and age, a lot of people don’t really listen to albums… I’m guilty of checking out bands who I’ve never heard and just see what they sound like. I’ll just click on a song. ‘Oh if it’s not for me,’ then I’m like ‘alright,’ which sucks. I don’t like that about myself. It’s definitely a different time we’re living in.”

He added, “I’d love to make a concept album, but we think it’s important how it flows.”

Aside from celebrating the release of Ceremony, Phantogram are also celebrating the 10th anniversary of their debut LP, Eyelid Movies — an album that “we wrote and recorded the album first” before doing any touring. And all Phantogram’s time on the road has helped them grow in many ways. “Playing a million live shows changes a lot,” Barthel said. “I think my voice has evolved through just growth and learning. I’m capable of singing in different ways [now].”

Barthel and Carter’s time as Phantogram has not only evolved them as musicians but also gave them the opportunity to work with some big names including Tom Morello, Big Boi, Marcus Mumford and Billy Corgan. But with all the accolades and success that they’ve received it all goes back to the fans.

“There were a lot of experiences meeting fans during the Three cycle, who would come up to me and tell me how they’ve been depressed or maybe they’ve attempted suicide or they felt alone and wrong and basically said that they listen to our music and it helps them get through hard times…” Barthel said.

“Just thank you. And the fans who stand and wait for us to get onto the bus and get to the next city; all those people I’m able to meet and say thank you back to them. It’s incredible.”