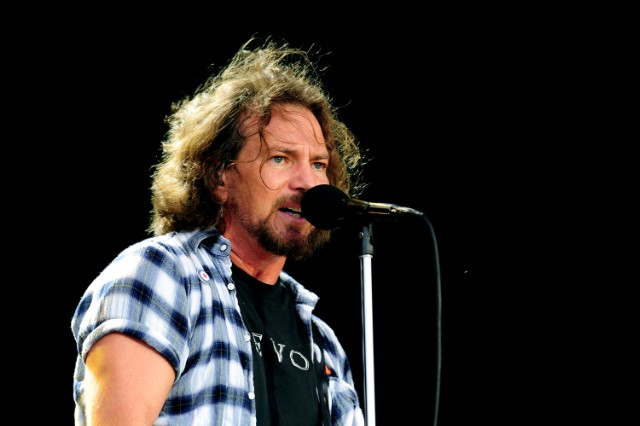 Pearl Jam are gearing up for something new. Eddie Vedder and co. posted a few cryptic images to the band’s social media channels, which pointed to locations in cities around the world with the date January 10. The band’s website later revealed coordinates for site-specific pop-up events at each location, where fans have since found augmented reality filters depicting moving clouds and waterfalls.

The installations also shed light on upcoming music from Pearl Jam. In addition to featuring their band name in jagged, heart-rate lettering, numerous pop-up billboards include the word “Gigaton” in the same text, leading some to believe that it might be the title of an upcoming eleventh studio album from the band.

The Italian fan site Pearl Jam Online claims that Gigaton will indeed be the name of the album, and that it will feature the billboard image as its cover art. The photograph, which depicts a melting glacier, was taken by Sea Legacy and National Geographic photographer Paul Nicklen, and relates to the album’s title (the melting of polar ice caps is measured in gigatons).

Pearl Jam’s last studio album Lightning Bolt was released in 2013. Since then, the band has remained active, releasing a whopping six live albums—three from their value series alongside Let’s Play Two, Live at Third Man Records, and their latest, MTV Unplugged, which arrived in November 2019. Most recently, the band brought their formidable collection of holiday songs to streaming services for the first time and have since announced that they’ll be touring Europe this coming summer.

See photos and videos of their augmented reality billboards below.

What makes a work of art timeless? This is obviously a very subjective question, but I want to share my personal take on this topic through my photos. To me, my work is timeless because what I photograph is not timeless at all. When I am shooting, I am looking to capture a unique moment that will never occur again. The animals and places in my work are not promised tomorrow, and it is my mission to capture their elegance and grace to be preserved in time. My photos depict the delicate pieces to the larger picture of a troubled planet. Always remember that hope is not lost, and it is through my work that I wish to inspire, uplift and provoke change in these unique times. Visit the link in my bio to explore all of my fine art. To learn more, please contact Lauren at [email protected]