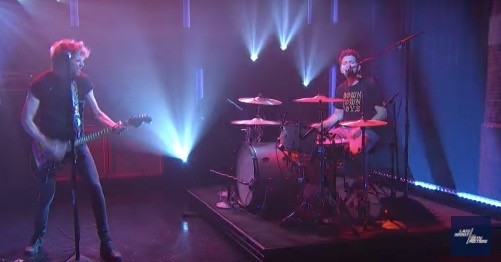 Vancouver rock duo Japandroids performed their rollicking single “No Known Drink or Drug” on last night’s episode of Seth Meyers’ Late Night. Brian King shreds his way on guitar and lead vocals, while David Prowse keeps things tight on drums and throws in his pretty “sha na na na” at the end of each verse. The song’s cathartic release is well-earned, and it’s hard not to feel a little tug in the ole’ heartstrings when King howls, “and no known drink/no known drug/could ever hold a candle to your love.”

The post-punk boys are still on a sweeping North American tour in support of their third album Near To The Wild Heart of Life, released in January.

Watch Japandroids perform below, and read our review of Near To The Wild Heart of Life here