Review: We’ve Got Some Doubts About Gwen Stefani’s ‘This Is What the Truth Feels Like’

Home » New Music » Reviews » Review: We’ve Got Some Doubts About Gwen Stefani’s ‘This Is What the Truth Feels Like’

From 12 years’ distance, 2004’s Love.Angel.Music.Baby. looks a little bit like a minor pop classic. Shorn of the elaborate, symbolic, inevitably political apparatus of the modern pop album — it’s not that it didn’t have any; it’s that what it had mostly involved a small adoring harem of fashion-forward Japanese girls and is best forgotten — Gwen Stefani‘s solo debut remains the kind of album that gets pop nerds excited. A deranged mashup of happy ’80s memories and shameless ’00s enthusiasms, it let the conflicting currents that tugged Stefani away from No Doubt spill over each other in a swirling flood.

It worked, and was welcome, because Stefani had always been of multiple, jarringly separate minds — like Nicki Minaj, or you. The famous spitfire optics of the Gwen canon — the lean, pogoing athlete of “Just a Girl” and “Spiderwebs”; the cartoon cheerleader of “Hollaback Girl”; the Harajuku thing; the clutch of mysterious signifiers a film critic might call The Sweet Escape‘s “image system” (giant wind-up key, leather hats, prisoner stripes, etc.) — obscure a calmer, croonier, and equally popular singer. “Simple Kind of Life,” “Underneath It All,” and “Serious” carved out a bittersweet niche that applied loping ska upstrokes to new-wave synth washes and blurred warm feelings about lovers into warm feelings about the synth-pop era.

This Is What the Truth Feels Like leads with a version of this Gwen: “You’re My Favorite,” “Make Me Like You,” and “Truth” are all spacious, twinkling liteness. The other Gwen, the one with the manic enunciations of a sanitized, pep-rally Johnny Rotten, is consigned to the second half, compressed into a handful of weirdly chorus-less tracks — “Red Flag,” “Naughty,” the deluxe edition’s “Rocket Ship” — and compression, you’ll recall from physics class and grumpy audiophile manifestos, doesn’t just make things take up less space, but turns them really dense. This is how you get “Naughty,” which is total chaos; had its squeals and pops and camp come-ons and catchphrases been spread across the entire album, we might still be trying to sell the whole thing to you 12 years from now.

It’s not that one Gwen is “boring” and the other is “too much.” It’s that separating them as strictly as Truth does disintegrates the alchemy of her appeal — in creating a schism between her punkish pep and her new-wave nostalgia, it leaves the former stranded and the latter generic. The pop-rock of the album’s first half is relaxed, breezy, intimate, and dull; the twitching beatscapes of its back end are tense, fiery, theatrical, and void. Stefani’s lyrics have aged, through a heartbreak or three, into an actually really appealing rueful confidence. “Misery” builds to one soapy, exquisitely timed squeal, and “Where Would I Be?” throws out a brief but welcome cheerleader taunt — amidst a thin ska-pop song produced by Greg Kurstin of Adele and early Lily Allen fame. Stefani shouldn’t be reduced to a clone of the latter, yet “Where” does exactly that. “Truth” and “Send Me a Picture” evaporate in real time. 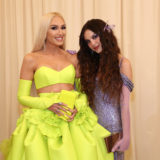 Olivia Rodrigo Covers No Doubt’s ‘Just a Girl’ in Philadelphia

If you had told us in 2004 that we’d prefer a virtually ignored 2012 No Doubt comeback album to a 2016 Gwen Stefani solo album, we wouldn’t have said you were crazy, because why start a fight, but we’d have been politely skeptical. The feeling then was that she’d gotten free. But the forces that pulled Stefani in so many directions on L.A.M.B. are spent; they’ve left her in pieces, and it might be time for the band — minus the AFI dude — to get her back together.