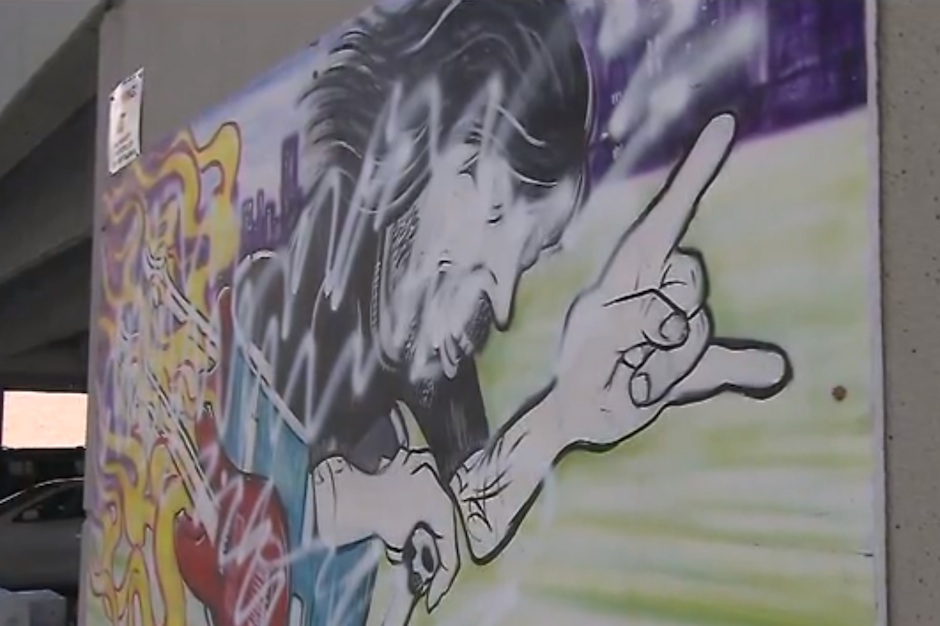 Yeah, Nirvana news is getting a little bit nuts, between the 20th anniversary of Kurt Cobain’s death over the weekend and the band’s induction into the Rock and Roll Hall of Fame on April 10. And sure, when local artists and the alt-rock icons behind Nevermind meet, the results can sometimes be, um, discussion-worthy — there’s a crying Cobain statue in his hometown. But it’s tough to know where to start with a report by Youngstown, Ohio’s WKBN of vandalism at nearby Warren’s so-called “Dave Grohl Alley.”

Recent SPIN cover star Grohl is a native to the town, and the alley is filled with art in the Nirvana and Foo Fighters member’s honor. Do we detect the influence of Louise Bourgeois’ distinctive spiders in that spindly metal Grohl sculpture seen below? In that same TV report, retired Police Sergeant Joe O’Grady takes a pretty stern tone regarding a spray-painter’s scribbling over the head Foo’s countenance. Though he compares the incident’s inevitability to “a West Coast earthquake,” he promises officials will “make the punishment fit the crime” — “something very unique.”

The wrongdoer is, of course, reportedly thought to be “an angry teen.”

We’re with Stereogum: Any ideas on what, exactly, this potentially unconstitutional retribution should be? Also, to make everything even weirder, you can scroll down to see security-camera footage of the vandalism allegedly in the act of being committed. There’s no sound, but at least they didn’t go with “My Hero.”