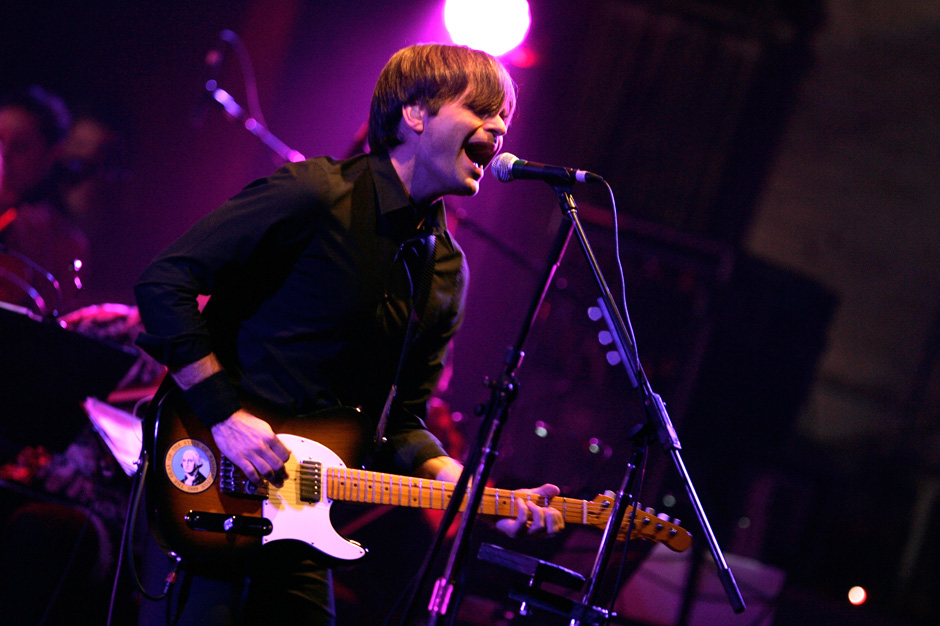 Start coasting towards the weekend with the latest releases by Death Cab for Cutie (a 10th anniversary edition of 2003’s star-making Transatlanticism), Los Campesinos!, Widowspeak, and more. They’re all streaming right now, and you can find the links below.

1) Death Cab for Cutie, Transatlanticism (10th Anniversary Edition). “Transatlanticism holds up as an exquisitely produced, largely flawless record in which every song is bound to serve as someone’s favorite. As such, though new would-be fans are born every day, most of its target audience already owns the thing, right? Enter this reissue, out Oct. 29, in which the original album is packaged alongside an identically sequenced but otherwise revelatory set of demo versions. For those who’ve immersed themselves in Transatlanticism’s studio version over the course of the last 10 years, these demos form fascinating sketches of a great album in progress.” (via NPR)

2) Los Campesinos!, No Blues. “Los Campesinos! will release their fifth album on October 29 — the optimistically titled No Blues, whose initial offering was far less cheerily named ‘What Death Leaves Behind.’ The Welsh sextet’s latest offering toys with a similar outlook. ‘Oh it won’t get better,’ sings Gareth Campesinos! at one point, before adding, ‘That doesn’t mean it’s gonna get any worse.’ Meanwhile, ‘Avocado, Baby’ is about as bright-sounding as the band gets — dance-y over angular guitar-play, helped out by sky-scraping synths, and backed by a chorus of children singing along with the playful hook: ‘I have a stone so tough it’s crazy / That’s why they call me the avocado, baby.'” — SPIN (via Pitchfork)

3) Various Artists, SMM: Opiate. “The concept of SMM — a vague catch-all for warm, austere, ambient electronic music with organic textures — was concocted by Ghostly International founder Sam Valenti IV around 2004 for a series of 12-inches that the label was releasing… In [label manager Jeff Owens’] capable hands, the SMM concept has turned from a loose cobbling together of droney outsiders to an attempt to produce a compilation with a cinematic eye. Unlike overstuffed label comps, SMM: Opiate, the second disc under Owens’ watch, has only nine tracks and less than 45 minutes of music… [it] slowly cycles through numerous ebbs and flows while still showcasing the soft, dark-hued edges of the ambient vanguard — the piano flutters of Berlin chamber-drone duo A Winged Victory for the Sullen, the ecstatic swaddle of prolific Tokyo fuzzmasters Celer, the haunting churchlike drones of anonymous Brooklyn knob-twister Black Swan, and the nightmarish noir of Norway’s Pjusk.” (via SPIN)

4) Widowspeak, The Swamps EP. “Widowspeak cap off a strong 2013 with their brand new EP, The Swamps. [They] started the year with Almanac, a sophomore album that found the Brooklyn-va-Tacoma duo exploring darker and dreamier fare… [Here,] you’ll find their six-song Capture Tracks follow-up streaming in full. We’ve already heard the prairie-crawling ‘Calico’… Now we’ve got ‘Theme From the Swamps,’ a backwoods jam that plays like a minimal take on Brian Deck’s shambly Modest Mouse meddling; ‘Smoke and Mirrors,’ full of Robert Earl Thomas’ resonant guitar strum, hand-hit drums, and sweetly silken vocals courtesy of Molly Hamilton; the cheery ‘Brass Bed’; and the alternately brooding and drifting ‘True Believer.'” (via SPIN)

5) Far-Out Fangtooth, Borrowed Time. “Far-Out Fangtooth first took shape in 2009, as a collective that bonded over B-movies and avant-garde weirdness. Since then, the Philadelphia outfit has doubled its number of permanent members (from two to four), and let loose a few collections of festering, psychedelic post-punk…. Now, Far-Out Fangtooth are doling outBorrowed Time, a nine-track platter of churning goth-grit that arrives on October 29 via Siltbreeze Records. Produced by Justin Pittney (who recorded 2012’s three-song The Thorns EP) and mixed by Jeff Ziegler (whose previous credits include fellow Philly fixture Kurt Vile), the upcoming LP is streaming in full right here at SPIN… [Marvel] at the feedback-filled horror show. (via SPIN)

6) Worriers, Cruel Optimist. “Recorded with the help of guitarist Rachel Rubino, drummer Mikey Erg, and bassist Tim Burke, [Worriers’] upcoming full-length acts as a pop-punk manifesto, serving up eight thrilling tracks that blend ragged hooks with political lyrics… Pulling from influences in literature (‘Passion’ is sung from the perspective of a character in a Jeanette Winterson novel whose gender is never revealed); fine art (‘The Only Claude That Matters’ is inspired by a selection of text by artist Claude Cahun that deals with androgyny); and power-pop (see the guitar heroics in ‘Best Case Scenario’), Cruel Optimist is a dynamic, focused statement that clocks in at just under a half-hour.” (via SPIN)

7) Audacity, Butter Knife. “Audacity put out the the first full-length on their Fullerton, California, hometown’s beloved Burger Records, but the surf-splashed garage-punks have made the jump to Suicide Squeeze Records for their upcoming album. Butter Knife, due out on October 29[,] only sharpens the band’s high-octane hooks, from the fist-pumping ‘Hole in the Sky’ to unexpectedly mellow, piano-centered finale ‘Autumn.’ The road trip-ready opener ‘Couldn’t Hold a Candle’ hints at its second-person subject’s vast potential. When it comes to scruffily irresistible new shout-alongs, not much compares to these.” (via SPIN)

8) Blu & Nottz, Gods in the Spirit EP. “Blu and Nottz are a wild combination. The Los Angeles rapper and the Norfolk, Virginia beatmaker both sit on the curve of where traditionalist-leaning hip-hop (meaning, fervid spitting and knotty, sample-based beats) is headed right now: away from in-the-pocket ’90s worship toward something more insular and bizarre… On Gods in the Spirit, Nottz’s beats are busied and treble-heavy, often as nimble and aggro as the raps from Blu and a dependable group of guest emcees (Aloe Blacc, Homeboy Sandman, Nitty Scott, and others). And hey, all the God talk on this EP, coupled with these noisy, epic-sounding beats, can’t help but invoke the recent go-for-baroque ambition of Kanye West (not to mention, Blu’s own controversy-courting use of religious language).” (via SPIN)

9) COUM Transmissions, Home Aged & the 18 Month Hope. “The fact that COUM Transmissions was initiated around the same moment when the ’60s died is eerily telling. Formed by a younger Genesis P-Orridge, COUM partook in Fluxus and Dada inspired performance and mail art with an intent to subvert British society… It seems that the work of the group culminated in an installation called Prostitution, which displayed a used tampon and was rife with pornography. This was in 1976, the same year that Throbbing Gristle would form. Dais’ compilation [Home Aged & the 18 Month Hope] is a titilating look at the development of Throbbing Gristle, including key finds such as a recording of COUM’s opening set at a Hawkwind show.” (via Ad Hoc)

10) Moonface, Julia With Blue Jeans On. “Spencer Krug will unleash a new album under his Moonface moniker [on] October 29 via Jagjaguwar… The former Wolf Parade and Sunset Rubdown member is calling this one his ‘love record’… According to his label, Krug has scaled back for his latest LP, doing away with electronic flourishes, overdubs, and effects in favor of just piano and vocals.” — SPIN (via Pitchfork)