Tinuviel Sampson: co-founder, Kill Rock Stars: [Releasing the Bikini Kill EP] seemed the obvious thing to do. I never thought of it as anything more or less than what needed to be done, then and there, no hesitation. So I did what I could to make it happen: I borrowed a lot of the money for the initial pressing from my brother.

Candice Pedersen: It was kind of the first release of an indie band from Olympia where there was a lot of known anticipation.

Tobi Vail: Honestly, for me, the EP came as an afterthought. I knew we would put out tapes and singles. But I didn’t know very many people who had released a 12-inch record.

Kathleen Hanna: It was a record for girls; I wanted them to understand where we were coming from, to feel like it was written for them.

Tobi Vail: Bikini Kill wanted all girls to start bands in all towns as a means of creating culture. We believed that if girls created culture en masse, that multiple female perspectives would be represented and things would start to change. 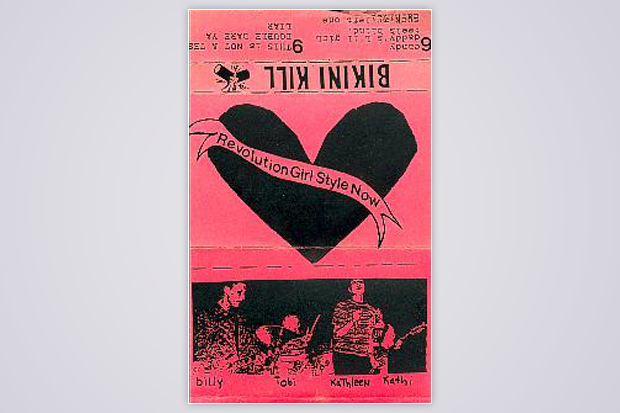 Carrie Brownstein: Hearing Bikini Kill was like having someone illuminate my world for the first time. It was very liberating. It’s hard to express how profound it is to have one’s experience broadcast back for the first time, how shocking it feels to be acknowledged. It was a revelation.

Kathleen Hanna: Since I loved underground music, I tried to carve a space for feminism within it. Those were my hopes.

Tim Green: People would write them off as crazy man-haters, or whatever. There were a lot of times that I tried to explain to people that is was something bigger.

Ian MacKaye: Riot grrrl exploded so fast and there was such a hubbub and Bikini Kill were the purveyors, and they were such a great punk band — I could kind of relate to what they were engaging in. With Minor Threat, there was such a to-do early on with “straight edge.” We’d pull into cities and there’d be drunk morons yelling about how they were “bent edge” and very regularly people would try to fuck with us just because we didn’t drink. But thank god Minor Threat broke up before people really started to identify. But Bikini Kill, they were present and playing as it was all going down — they had to contend with it. They became a phenomena.

Kim Gordon: They were like the best kind of rock stars, charismatic but off the grid. They were my favorite live band for a while.

Carrie Brownstein: I feel very lucky that Bikini Kill came first. By the time I was playing in Sleater-Kinney, a lot of those early battles — for space, for respect, for recognition within the context of punk and indie music — had already been fought. I felt like we were able to be recognized as a band, not just a “female band,” and that is a luxury that cannot be overstated. There is a certain kind of exhaustion that comes from having to explain and justify one’s existence or participation in an artistic or creative realm. What a privilege it must be to never have to answer the question, “How does it feel to be a woman playing music?” or “Why did you choose to be in an all-female band?” And the people who get there first have to work the hardest. Bikini Kill weren’t the first — they had predecessors and influencers — but they carved, tore, and clawed out a space in music for which I am very grateful.

Tobi Vail: We believed that if it was just as common for girls to be in bands as it was for guys, then the world would actually change. I still believe this. Unfortunately, Bikini Kill is still needed. Keeping the records in print [via Bikini Kill Records] is one way to keep those ideas and methods alive.