Candice Pedersen, co-founder, K Records: [Bikini Kill’s first shows] were really fun — and they were good! You could tell they had a very clear vision. It was totally in character with who they were personally and artistically outside of music.

Justin Trosper, guitarist/singer, Unwound: There was a lot of commentary [about the band]. They made a big splash in our small pond. The older contingent of folks thought they were amateurish, dilettantes, crazy, confused, and reactionary. Bikini Kill had a song called “Fuck Twin Peaks” that addressed this. There was also kind of this hippie/mosher/student/grunge crowd of showgoers who they didn’t go down too well with.

Allison Wolfe: Bikini Kill shows were not to be missed, whether you loved or hated them, you wanted to be part of the conversation.

Tobi Vail: There was definitely a backlash from some folks. Nirvana was supportive from the very beginning — they totally got it.

Allison Wolfe: Regionally and nationwide at that time, for the Pacific Northwest, it was grunge time. It was exciting, but it was super duded-out and seemed like a repackaging of sexism-as-usual in the music scene. We all felt like something was missing.

Justin Trosper: There was a great tradition in Olympia of having disparate elements fill a show lineup. So, for example, Beat Happening often opened for bands like Melvins and Fugazi. The crowds were none too pleased. I think that Bikini Kill learned a thing or two from that and made it their advantage. After all, they were already friends with Nirvana and Nation of Ulysses, and so on. From the hippie-mosher perspective, it was kind of like, “Why do those bitches get these shows?” And then Kathleen would say something confrontational and things would go worse. Then Tobi would start screaming, Billy looked like a vampire, and so on.

Kathleen Hanna: It was pretty fucking grim, way worse than I had thought: a guy in a band yelling “Incest Is Best Put Your Sister To The Test” before they started their set, constant accusations that we only got attention ’cause we were women, being physically assaulted by men before after and during our sets, being screamed at by men during shows, sound guys threatening to turn off the polarization or whatever it’s called so I’d get shocked every time I sang into the mic. And, of course, very few girls came to shows in the beginning. It wasn’t a welcoming atmosphere, more like a fucked-up, violent cigar club. 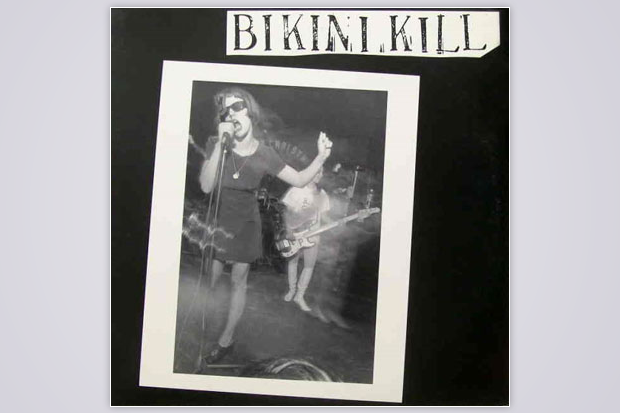 Justin Trosper: There were a number of pretty tense and sometimes volatile moments at shows. The line of civility was often blurry. For me, it was an introduction to a lot of political and art concepts and the beginning of a life-long awareness of power dynamics. My joke is that I was a riot grrrl guinea pig.

Kathleen Hanna: It was exciting and scary, especially because our lyrics and zines were so explicitly feminist and Olympia wasn’t a particularly “political scene” back then. People hated us with a passion, but the five teenaged girls who came to every show kept us going.

Justin Trosper: My senior year in high school, 1991, I came up with this idea that Kathleen could come to my class and do a talk. She did a spiel about rape and violence. Everybody seemed really weirded-out and uncomfortable, but I was super stoked. The teacher was impressed, but she still failed me and because of that I didn’t graduate from high school.

Kim Gordon, bassist, Sonic Youth: I remember we [Sonic Youth] had a Bikini Kill fanzine before we saw them [play]. The first time we saw them play I think was in Olympia when we were touring out there. It was really exciting to hear about so many girls organizing and making their own systems.

Kathleen Hanna: It was way different in Olympia. Girls and women were encouraged to participate, not just in dude schemes, but in their own. It really was K Records setting the tone by asserting that we don’t need corporations telling us what good music is, we can make our own culture. That opened up a big door, and bunch of women just walked right through it.

Candice Pedersen: [Kathleen] came by the [K Records] office very excited; she wanted to know about women in rock. We carried only independent bands and labels and we carried a lot of bands with women in bands, like Frightwig and Scrawl, but at that point I remember her being interested in stuff outside my focus. She mentioned Hole and I was like, “Nooo, that’s not an area we go down.” Kathleen was very self-educating and sincere.

Molly Neuman, drummer, Bratmobile: We had a big sister/little sister relationship with them. Bratmobile was our first band and we were learning how to play. I remember once asking Tobi if she would give me a drum lesson and she said, “Just think about the kick drum.” She wasn’t into teaching me her style — she wanted me to figure it out.

Candice Pedersen: The world of Olympia was small, and at the time, anything that came from outside that world was via phone or mail. There were a lot of letters from younger girls who were very excited for the [Bikini Kill demo] tape. Letters with personal responses from young women, it was new, as was the volume of them. People didn’t know they needed it, it was more, “I want this, I want to know what it is,” and then it blossomed quite quickly, friend to friend — that kind of effect.

Carrie Brownstein: Before I transferred to Evergreen State College, I went to a state university in Bellingham. My roommate was from Olympia and I was very excited because I thought she would be able to tell me about a city that had become a very mythical place for me. But it turned out she knew nothing about the punk scene in her hometown. I spent a lot of time playing her Bikini Kill and Heavens to Betsy. She was very patient with me while I basically proselytized about music. I dragged [her] to [see] Bikini Kill, Heavens to Betsy, and Mecca Normal. Bikini Kill ended up canceling, but it was the show that made me drop out and apply to Evergreen so that I could move to Olympia as soon as possible.

Allison Wolfe: I desperately wanted Bratmobile to be on that tour, but Erin [Smith, Bratmobile guitarist] was in school. Maybe we weren’t even asked. I felt like we missed out on a lot of it, so I didn’t want to even hear the stories or see the photos.

Pat Whalen, booking agent for Nation of Ulysses: [Bikini Kill and Nation of Ulysses] wanted to play, like, two weeks in the Midwest alone, which was pretty much impossible, although I didn’t want to believe it at the time. I booked them about five shows, leaving huge holes in their schedule to fill in with the odd self-booked house party.

Tim Green, guitarist, Nation of Ulysses: There weren’t as many fights [on NOU’s first tour with BK] as there were on later tours we did with them. There were always people in the audience who wanted to fight them, or at least fuck with them. Dudes just weren’t ready for that kind of confrontation and seemed really threatened by Bikini Kill.