Kathleen Hanna: We played at a former slaughterhouse in Lawrence, Kansas and a guy showed up during sound check and came over to talk to me, and started yelling in my face that it was my fault his girlfriend left him. Our roadie stepped in his way and he reached over her and shook my shoulders like I was a kid who’d crossed the street without asking, but way more violently.

Ian MacKaye: guitarist, Fugazi; producer of the Bikini Kill EP: I think, by and large, people hated Bikini Kill. You have to remember that time in America was dominated by dude hardcore bands.

Tobi Vail: People forget how much shit people talked about us. It wasn’t like we were critically acclaimed like Sleater-Kinney. I love them, but we were more like Black Flag. We led a more underground existence; we were outsiders. Every show was a battle and kids were fighting for their lives. It was intense to be at the center of all that female rage and terror. Abused kids would come to us looking for a way out. It was hard. Kathleen felt that more than the rest of us; we were insulated by our instruments. It was a very raw, emotional place to be in. It was hard for us to tour because we were at the frontline of teen-girl pain and we didn’t have much escape.

Kathleen Hanna: It felt scary, exhilarating. The strong reaction, to me, meant we were doing something new.

Ian MacKaye: They came to town with Nation of Ulysses in the summer of ’91. James [Canty] was in Ulysses and through his brother [Fugazi drummer Brendan Canty] heard the tales. Bikini Kill opened the return show at D.C. Space and they were phenomenal.

Molly Neuman: When they played at D.C. Space, it felt triumphant. 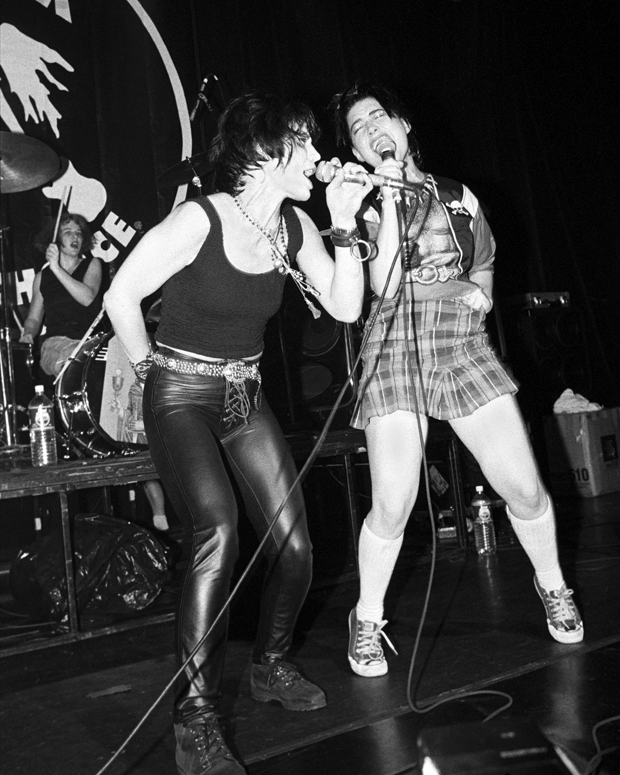 Ian MacKaye: I have had this standing offer [with Inner Ear’s Don Zientara], since we started working together in 1980, that if there is a band that is interesting to me, a band of note, that he’ll give me a few hours as long as I pay for tape. They seemed like the perfect candidate for that situation. Plus, they were clearly broke and what they were doing needed to be documented.

Ian MacKaye: They said, “I guess so,” and I think we went the next day.

Tobi Vail: He offered to record us for free, no strings attached. I don’t remember thinking that this was going to be a record or ever released necessarily. I didn’t want to record in a studio with a professional sound, but I recognized that it was a good opportunity for us.

Kathleen Hanna: We just wanted to put something out that sounded like us live, flaws and all.

Ian MacKaye: They were freaked out. That day in the studio they were acting weird and making jokes and were really awkward. I don’t think they’d ever been in a studio before.

Tobi Vail: I wasn’t able to tour with my own drum set — we toured in a car — so I had to borrow one. [The songs] sound a little rushed or unfinished on the EP, but there is a good side to sounding unpolished. It sets an example that you don’t have to be an expert to make a record. I remember being exhausted. Recording studios are traditionally male-dominated environments. I think that was a part of my discomfort.

Kathleen Hanna: [D.C.] was definitely more politicized than Olympia and there had been a lot of cool girls in bands and behind the scenes, but when we got there, we still found a lot of old male hardcore bullshit we had to wade through. Also, every fucking show was a benefit, so people who had to take the night off work to play a benefit lost money and didn’t even get a fucking bottle of water! I just felt like that attitude made it so only people with trust funds could afford to make music there.

Tobi Vail: [“Thurston Hearts The Who”] was recorded live in between the time that our EP was recorded and came out. We were living in Washington D.C. and toured the East Coast quite a bit in 1991-92. Whenever anyone played New York, everyone would talk about Kim and Thurston coming to the show as this idea of that’s how your band becomes “cool” or whatever. One night Kathi and I just made up this song as we were falling asleep and we ended up playing it live soon after — maybe a few days later. We thought it was funny. Reading the show review into the mic was in homage to “HC Rebellion” by Pussy Galore. Later on, Sonic Youth were incredibly supportive of us. The song was not meant as a dis. It was our sense of humor, but it was also a way for us to question the “authority” of “the scene” or whatever.

Ian MacKaye: I gave them the tape and I didn’t hear from them anymore past that. A while later, I heard that they hated it. I was bummed about that. And then a few months later it came out. I thought, “Hey, they must have liked it!”

Tobi Vail: We didn’t know what we wanted to do. We had some people approach us about putting out a record. We talked about starting a label to release “riot grrrl” bands, but decided against it.

Kathleen Hanna: Slim [Moon, Kill Rock Stars’ co-founder] had put out a split spoken-word 7-inch with me, and then he started doing more, and we were like, “You should do this for real, you’re the only person who has any business acumen, and the only person we would trust.” So, he started Kill Rock Stars and actually ended up putting out Unwound first, which I will be forever jealous of.