Bikini Kill were a band, a movement, a media phenomenon, an inspiration to girls, and a cheeky scrawl across the skin of pop culture. Here they speak on their thrilling, dangerous, combative beginnings. 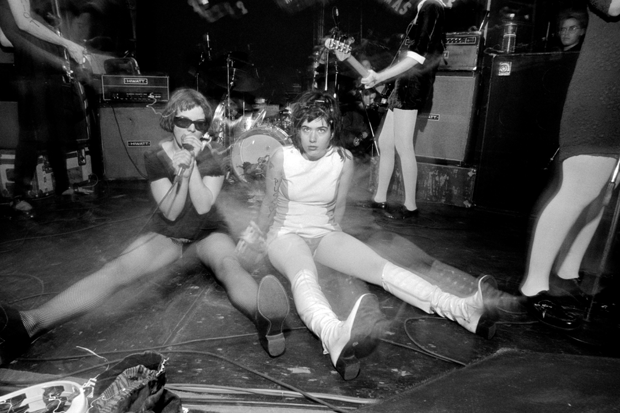 Bikini Kill were more than a band — and intentionally so. They were a beacon and a call to arms. They were “Girl you can do this, too” writ large. The band initially began as a radical feminist trio comprised of vocalist Kathleen Hanna, scene-nexus drummer Tobi Vail, bassist Kathi Wilcox, and later, only boy Billy Karren on guitar. Their sound was remarkably dynamic, tough and terse, sloppy and surfy — a menacing backdrop to their scream-along ideology.

The Olympia, Washington-based group became the primary party organ for the Riot Grrrl movement, a loose network of young female musicians, writers, and activists organized in opposition to the patriarchy inside and outside of the D.I.Y. punk underground. When they detonated on the scene in 1990, they awoke and radicalized their young female fans, who could hear their own lives, fuck-you feelings, and survivors’ tales in singer Kathleen Hanna’s caustically shouted lyrics. “I remember being very struck by the lyrics of “Feels Blind,” remembers Wild Flag and Sleater-Kinney guitarist Carrie Brownstein, “‘As a woman I was taught to be hungry / Yeah, we could eat just about anything / We’d even eat your hate up like love.’ It was the first time someone put into words my sense of alienation, the feeling that all of these institutions and stories we’d been taught to hold as sacred had very little to do with my own experiences.”

As the Riot Grrrl movement was eventually discovered by the mainstream media, Hanna and the band were looked to as de facto mouthpieces and symbols; the movement was roiled by attention above and below ground that misunderstood their intent. Bikini Kill became lightning rods for macho trolls and icons for those who wanted a more liberated, girl-positive world.

This month, Bikini Kill’s self-titled debut EP turns 20. Six songs recorded on the spur of the moment at the behest of Fugazi’s Ian MacKaye, its release can be seen as a marker — there is punk before this album, and after. The group’s longtail influence is now apparent in Sleater-Kinney, Sonic Youth, the Gossip, Rookie Magazine, Tegan and Sara, Nirvana, Four Tet, and perhaps most notably, Pussy Riot.

What follows is a social history of that 15-minute vinyl riot, which is being reissued along with excerpts from Vail and Hanna’s respective zines (Jigsaw and Bikini Kill), a poster plus extensive liner notes and interviews. It’s the first release on the band’s own label. So, here’s how they sparked a revolution grrrl-style now. 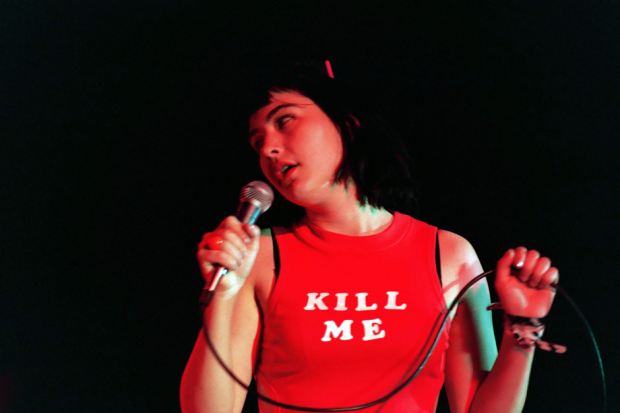 Kathleen Hanna, singer: Tobi was walking by a coffee shop and someone said she was “the girl from the Go Team.” It was the first time I realized I could maybe make music too, ’cause there she was just walking down the street.

Tobi Vail, drummer/singer: Kathleen started The Reko Muse Gallery in Olympia with a collective of women in the late ’80s. They started putting on all-ages shows to pay rent and Kathleen would do spoken word. She looked like Hopey from Love and Rockets. She asked me to start a band with her after she read [Vail’s fanzine] Jigsaw #2.

Allison Wolfe, singer, Bratmobile: I saw this girl who looked kind of scary everywhere that I went. She had bangs, a shaved head, combat boots, and was always glaring. I was very intrigued by her; that was Kathleen. The first time I met her she yelled at me about being on the guest list and didn’t want to let me into [Reko Muse Gallery] for free. It turned out we were both dating the same guy and she’d figured it out. I was way too naïve to know. He was gross.

Kathleen Hanna: Kathi [Wilcox] and I had known of each other at college because we had the same color hair and haircut. Even though I’m way shorter than her, we were always getting confused for each other. Kathi was always over at our house. I was like a fucking car salesman [to get her to join Bikini Kill].

Tobi Vail: I met Kathi in 1989. We were both hired at a sandwich shop on the same day. We worked at a lunch counter populated by state workers — she was at the deli counter and I was serving chili. For months, the only thing we said to each other was “cheese” or “cheese and onions.”

Kathleen Hanna: I wanted to be a part of a family. I wanted to be someone who helped girls who’d been abused feel less alone because I’d been one of those girls. How is it that the world is half women, so many of us have experienced rape, battering, and verbal abuse, yet there were very few songs about these issues? I also wanted to make sure young women knew that feminism wasn’t dead just ’cause that’s what all the books and magazines were saying.

Kathleen Hanna: I used to make up most of my lyrics and melodies in my jacked-up Toyota truck and I specifically remember singing [the Bikini Kill EP’s “Double Dare Ya”] all the way to practice over and over so I wouldn’t forget it. [“Suck My Left One”] was pretty much the [same]. You know, just singing in my truck, but about incest.

Tobi Vail: I do remember playing early practice tapes for people and thinking, “We are gonna be the most misunderstood band ever,” which was true for a long time.

Kathleen Hanna: Next thing I remember is Tobi bringing Bill [Karren] to practice, after trying out a ton of female guitar players, and it just sorta worked out that he was in the band now.

Tobi Vail: I met Billy first. In 1987…I went to Portland to see the Meat Puppets. At the time, the punks hung out in front of a Burger King on Burnside. We ran into a carload of Eugene folks over there and that is where I met Billy. It was like the Ramones song, “I met her at the Burger King / We fell in love by the soda machine.” I remember the first thing he said to me was, “I wanna rock and roll all night and party every day!” He joined Bikini Kill a few months before we went on our first U.S. tour. Billy was kind of a beatnik. He used to call William S. Burroughs and they would talk on the phone late at night.

Jessica Hopper
Next
Tags: fugazi, It Was 20 Years Ago..., Nation of Ulysses, Nirvana, sleater-kinney, Unwound