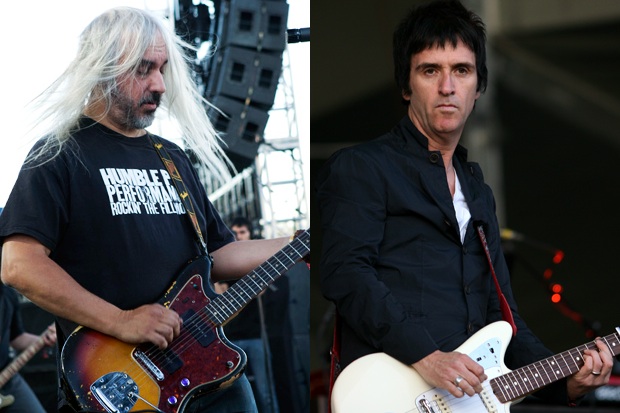 Dinosaur Jr.’s J Mascis turned down an opportunity to join Nirvana, but Smiths guitarist Johnny Marr won’t miss his chance to play with Dinosaur Jr… at least for one night. To celebrate the 25th anniversary of the band’s classic You’re Living All Over Me, Dino Jr. will perform the album in its entirety at New York’s Terminal 5 on December 1. But that’s just the first set; the second half of the concert will feature three special guests dropping by to play other choice cuts from the band’s discography, including their SPIN Essential new album I Bet on Sky. According to a statement on Dinosaur Jr.’s website, “Marr will sit in with Dinosaur Jr. for a song or two, and we’re thrilled he’ll be celebrating with us.” It’s not exactly a Smiths reunion, but it’s probably the next best thing.

This is the coolest thing to happen to Marr since Monday night, when he won the Q Hero statuette at the Q Awards. Dinosaur Jr. promise to announce their other special guests in the coming weeks. And don’t forget that the band will release their YLAOM live document Chocomel Daze, which captures Dino Jr. performing in the Netherlands in 1987, on November 19.