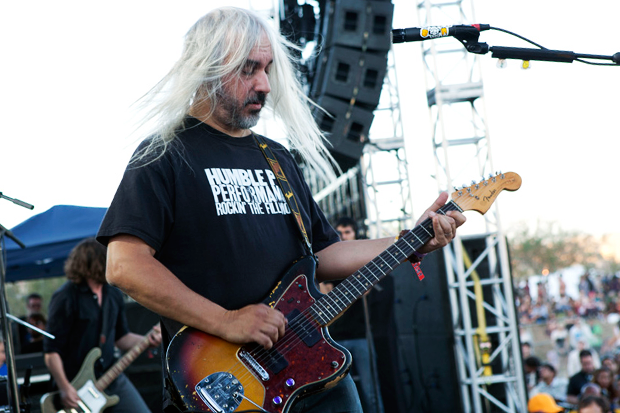 While reporting his long feature on indie rock titans Dinosaur Jr., SPIN editor David Bevan discovered that the band’s frontman, Joseph, “J” Mascis Jr. had almost found himself a member of both Built to Spill and Nirvana. While rumors about the latter have circulated over the years in a number of permutations, the now bearded, infamously taciturn guitar hero explained what really happened:

“Nirvana was playing Maxwell’s and after the show I was talking to Kurt and [Sonic Youth’s] Thurston Moore,” Mascis says, referring to Nirvana’s date at the famed Hoboken, New Jersey venue on July 13, 1989. “Kurt said, ‘you should join my band.’ I think he was sick of the guy Jason [Everman] who was in the band at the time, and thought I should play guitar. I didn’t think much about it. Later, there was also talk of playing drums on a single [1990’s ‘Sliver’] they were doing, but it ended up being [Mudhoney drummer] Dan Peters.”

Years later, as Built to Spill frontman (and another Mascis guitar disciple) Doug Martsch began recording what many consider his outfit’s finest moment, 1997’s Perfect From Now On, the Boise-bred singer-songwriter looked to the Dinosaur Jr. frontman (and frequent tourmate) to play drums on the record.

“When we signed to Warner Brothers [in 1995], I didn’t have a band,” Martsch says. “One idea I had was to play all the instruments myself and just get a drummer. I ended up doing that and scrapping it, but another idea was to have J play drums on the record. He was willing to do it, but then I kinda decided it wouldn’t be a good idea. I felt like I needed to work with someone who I could really work with a little more, you know? I didn’t know how we could work together, I had no idea and I didn’t want to get started on something like that. I didn’t want to be telling J Mascis what to play on drums. I wanted to find someone I felt comfortable really expressing myself with. But there was a moment where he was almost the drummer on that record.”