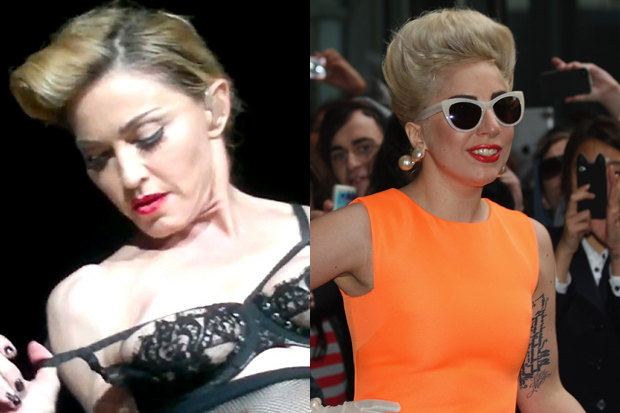 How will Madonna and Lady Gaga manage to keep themselves in the news on tour overseas while Britney Spears is sucking up all the attention at home by repeatedly “storming off” the set of The X Factor? So far, this dilemma hasn’t actually been much of a problem. Madonna has worked Gaga’s unintentional “Express Yourself” homage “Born This Way” into her own set, associated an image of French politician Marine Le Pen with a swastika, and most recently popped out a boob while stripping to “Human Nature” onstage in Turkey (video here for the curious/the Wayne Coyne). The press has gone wild for all these little stunts, especially the intentional nipple reveal, but we’ve all seen much, much more of Madonna before.

Meanwhile, Lady Gaga has become the scourge of Southeast Asia and vowed to perform in Indonesia despite every indication there was no way her show could go on as planned (it didn’t). She also already announced plans to announce an announcement about announcing her next album in September and gone on a little onstage rant about people who wanna bring her down. Over the weekend, she suffered a painful blow to the head during a performance of “Judas” in Auckland, New Zealand, right before delivering the line, “Judas is the demon I cling to.” (Religious protestors have yet to cling to this mishap as proof the singer is demon spawn, which frankly seems like a missed opportunity). As Rolling Stone reports, after a dancer accidentally smashed her in the head with a giant pole (again, heads up, headline writers!), the singer told fans, “I did hit my head and I think I may have a concussion, but don’t you worry, I will finish this show,” and rallied through another 16 songs like a Bieber trooper.

Nudity… significant injury… these two are showing their hands a little early. Remember, their tours don’t hit the U.S. for months (August 28 for Madonna, late fall at the earliest for Gaga). Save some energy, ladies, or you’ll be out of controversy before Europe!