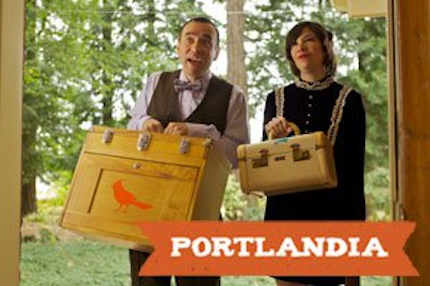 Fresh off losing the Grammy for Best Rock Performance to the Foo Fighters, the Decemberists bounced back with their new song "One Engine," which will be included on the Hunger Games soundtrack, out March 20 (the film drops three days later). Listen below, via Consequence of Sound and Soundcloud.

The Shins also dropped a track today, this one another from their Album You Gotta Hear Port of Morrow. It’s more dancey than the band’s usual, but Mercer’s vocals render the track unmistakably those-guys-from-Garden-State-and-that-Bells-band.
Listen to "The Rifle" on Hypem, via Listen Before You Buy.

And perhaps in the most melancholy of Portland news today, Ben Gibbard is unquestionably the most distraught man in indie rock right now (after all, it’s been less than a month since Zooey Deschanel ripped out his heart with her cold, unfeeling quirky-baby fingers). He tweeted his Valentine’s Day sorrows to the entire world: "Flying to Australia tonight, landing 2/15. Sometimes the international date line gives you a gift in what it takes away." (Not to be cruel about your heartbreak, dude, but if we don’t get an excellent Death Cab album out of this…)

Don’t fret, though; not everything in the Northwest is so mopey. (The arguably unmelancholy) Joanna Newsom was on Friday’s episode of Portlandia. Watch below: