Plus, watch her sing 'Rolling in the Deep' a cappella for a thrilled Anderson Cooper 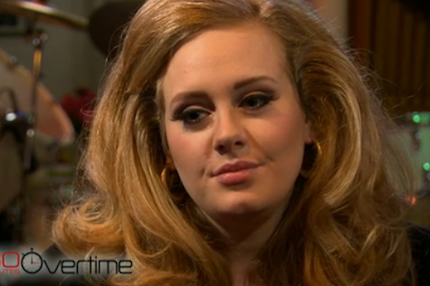 Tonight in the hour leading up to the 54th Annual Grammy Awards, 60 Minutes’ Anderson Cooper profiled Adele, whose return to the stage at the Grammys was tonight’s big story… until Whitney Houston tragically died yesterday in Los Angeles. The CBS show was kind enough to email out a transcript of the segment, but noted, “You may use up to 250 words of this transcript.” So here are the 250 most important words Adele spoke in her 60 Minutes interview:

How’d she communicate while speechless after vocal cord surgery? “I also had an application on my phone and that you type the words into it and then it speaks it. But the great thing is I love to swear. Most of ‘em you can’t swear on, but I found this one app where you can swear. So I’m still really getting my point across.”

The condition of her throat now is… “It’s basically a clean slate in my throat. If I decide to go on a 200-date world tour, it would happen again.”

Can she write anything but breakups songs? “Well I hope so. ‘Cause I’m madly in love and I don’t want to be like babe, I’m sorry, we’ve got to break up. I’ve got a new album to deliver. He’d fucking hate that. also, I can’t write another breakup record. That would be a real cliché. if it starts to be like five, ten years down the line, I will. I’ll break up with him.”

How does she figure out who her real friends are? “I plant stories and see who leaks them and then I get rid of ‘em, I’d tell, like, a group of people who I was suspicious of all a different story with different details in it, but all roughly the same story so I could keep my eye on it.”

Does she feel pressure to look like a video girl? “I don’t want to be some skinny mini with my tits out. And I don’t want people confusing what it is that I’m about. I just stand there and sing. And I don’t do stunts or anything. if I wanted to do all that, I don’t think I’d get away with it.”

That was 248 words! In your face, 60 Minutes! And here’s the clip of Adele singing “Rolling in the Deep” a cappella everyone’s been rightfully gushing about.