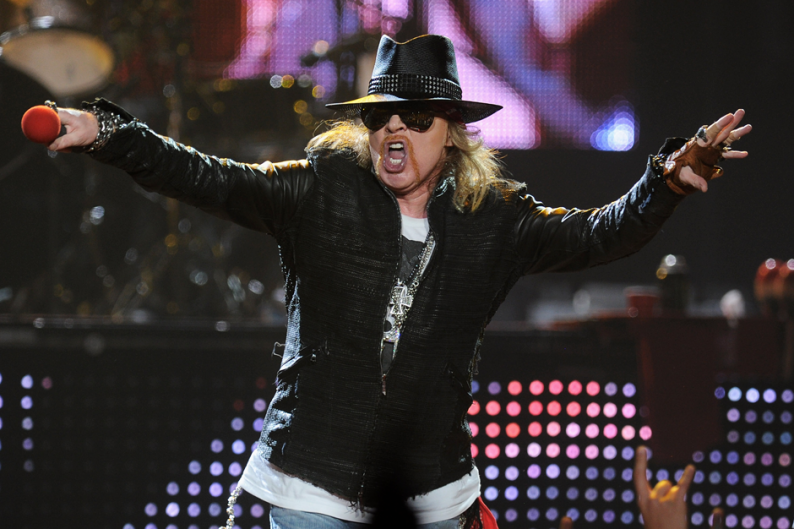 Aside from Axl Rose’s interview on VH1’s That Metal Show — his first televised chat in more than a decade — Guns N’ Roses frontman hasn’t spoken to the press on his out-of-nowhere U.S. Chinese Democracy tour. But with questions about the Rock and Roll Hall of Fame induction ceremony looming and a handful of dates left on the itinerary, Rose let Los Angeles Times pop critic Randall Roberts into his private backstage world at Seattle’s Key Arena Friday night. Their conversation covered all the usual topics, but we still managed to learn a few things:

1. Axl’s Post-Show Wardrobe Is… Casual
The lede kind of says it all: “Axl Rose is wearing a white cotton bathrobe and white tube socks, relaxing on a couch backstage Friday night after a three-hour concert at Seattle’s Key Arena, where he’d snaked his way through 34 songs with a version of the band he co-founded a quarter-century ago, Guns N’ Roses.” That’s quite an image.

2. GN’R Are on the Road as Part of a Legal Settlement
Wondering why Rose didn’t hit North America when Chinese Democracy actually came out in 2008? And why he’s suddenly touring the album three years later? “His current tour is part of a settlement agreement with former GNR manager (and Live Nation Entertainment executive chairman) Irving Azoff that dictated the band do a number of performances with Live Nation as the promoter,” Roberts explains.

3. Rose Is Shopping for a New Label Deal
Geffen released Chinese Democracy via an exclusive deal with Best Buy that was a total bust. But Axl isn’t done with the label system just yet. “Once I get the next things sorted out with the label, then I feel I can get to that creative place that I’ve been fighting to get to, and to use Guns N’ Roses to do so,” he said, later adding, “We’re gonna be busy — we’re gonna be busy all next year. We’ll be putting out new stuff as soon as we can figure out what our deal is with labels, blah blah blah.”

4. Rose’s Current Manager = Stephanie Seymour’s Former Assistant
Beta Lebeis and her two children are running the Axl show now. She calls him “more than a son to me.”

5. This Is Because All His Other Managers Were Conspiring to Reunite the Old Band
“They get their commission and they don’t care if it falls on its face,” Rose sighed.

6. Axl Needed to Figure Out How to Shimmy to His Old Songs Again
Adding older songs to the set list wasn’t an easy decision. “It was hard to make myself want to do the old songs again,” Rose said. “It was like, I wasn’t going around my house dancing to ‘Jungle.’ To even figure out how to even make myself move to those songs — and how I was going to move to them — that was a big thing to figure out in ’06.”

7. Axl. Is. Obsessed. With. Slash.
“Despite requests from Rose’s publicist that he not be asked questions about the former GNR guitarist, Rose himself mentions his ex-bandmate’s name minutes into the conversation and locks onto the subject.”

8. The Rock and Roll Hall of Fame Induction Is So Going to be a Shitshow
“There is no plan yet. There really is no plan,” Rose said. (We believe you!)

9. The Writer Was Too Scared to Ask Axl About His Many Trips Backstage
He mentions “the little makeshift dressing room that Rose frequently races into during guitar solos” but that’s the end of it. Remember, Rose went there 29 times during the band’s New Jersey show. C’mon.

10. Axl Has a Poor Understanding of What Air Marshals Do
Trying to make a point about where he’s at now in his career, Rose said, “You can say it’s my fault, but to me it’s like if you’re on a plane and somebody trips you and the air marshal arrests you for falling — like it’s my fault for allowing somebody to trip me?”