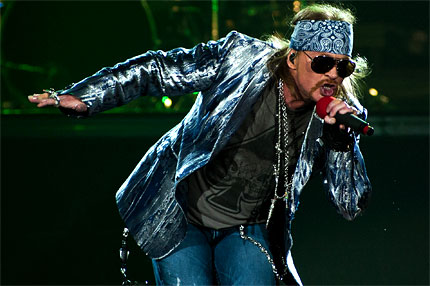 Guns N’ Roses’ first tour supporting Chinese Democracy technically started in 2001. The album didn’t actually come out until 2008, however, and Axl Rose and his latest lineup — which of course features no other original members — didn’t make their way to American arenas until October 2011. The bloated, three-hour show isn’t without its flaws, but it’s also thoroughly entertaining. There’s plenty of pyro. Axl still has a slouchy guitarist with a limp cigarette dangling from his lips (DJ Ashba). Rose energetically sprints across the stage and nails all the high notes. But a full third of the set is comprised of songs by artists other than Guns N’ Roses. And Rose does do a lot of mysterious vanishing. Here’s how last night’s show at New Jersey’s Izod Center breaks down:

First time Axl Rose trotted into the curtained-off area at the rear of the stage: 11:05 p.m.

Number of such trips offstage: 29

Longest amount of time Axl was onstage without interruption: 11 minutes (from 12:41 a.m. to 12:52 a.m., during which time Rose riffed on Elton John on a grand piano, then played “November Rain”)

Number of the Who songs on set list: 2 (“My Generation” sung by bassist Tommy Stinson, “Baba O’Riley” performed by pianist Dizzy Reed)

Number of Chinese Democracy songs on set list: Too many. Oh, but a real number? 7

Number of Appetite for Destruction songs on set list: 7

Number of guys spotted in the crowd dressed up like Slash: 1 brave soul

Number of guys spotted in crowd who looked exactly like Kid Rock: 1. Eerie.

Number of times Axl spoke to the crowd: 9, including the gem, “It’s nice to be back here. I had my doubts too if I’d make it.”

Number of bizarre backing videos featuring women in bikinis: 1, during “Rocket Queen,” and it was weird.

Number of Axl Rose wardrobe changes: Many. All involving different permutations of hat/bandanna/sunglasses/leather jacket, with the exception of one brief appearance in a longer topcoat.

Estimated fullness of arena by the time the show ended: 45 percent

See Also:
• Inside Axl Rose’s First TV Interview in Over a Decade