Skrillex, The Doors Get Dubstep in Your Classic Rock 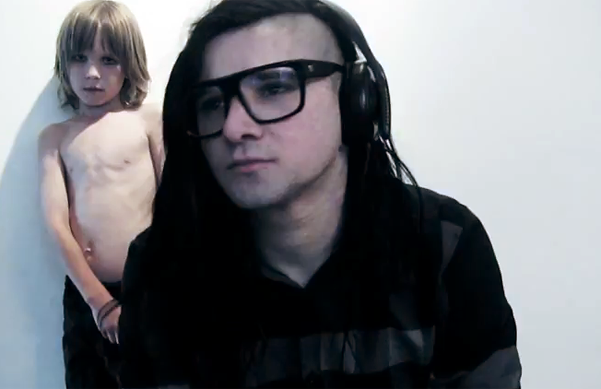 Lou Reed and Metallica, Coldplay and Rihanna, Justin Bieber and Kanye West — as the record-sales pie shrinks, artists from disparate genres are teaming up with what feels like potentially doomsday-signaling frequency to contend for their respective slices.

SPIN’s October cover story on brodacious dubstepper Skrillex compared dance music fans to the kids from an old Reese’s Peanut Butter Cups commercial — “You got electro in my techno!” “You got commercial in my underground!” — but we’re waaay past that now. Country star Taylor Swift performed live earlier this month with recently jailed rapper T.I. A recent mixtape exclusively contains dubstep reworkings of classic-rock standards. Dogs and cats, living together. The undead, rising from the grave!

Which brings us to Skrillex’s team-up with the surviving members of the Doors. As previously reported, the producer whose birth certificate presumably says Sonny Moore (we haven’t seen it, have you?) collaborated with the erstwhile hard-rock trailblazers’ Ray Manzarek, Robby Krieger, and John Densmore for new documentary film RE:GENERATION. You can now hear “the first new Doors track in the 21st century” — billed as a variation on Miles Davis’s “Milestones,” and titled “Breakin’ a Sweat.” The kids who know there’s no wrong way to eat a Reese’s will likely continue to stupefy their elders by devouring it, and unlike, say, Loutallica’s Lulu, it seems like it might actually be more entertaining to dance to than to read erudite music criticism about: Manzarek does his hilarious pillaging-dead-guy’s-legacy thing by quoting freakin’ “Light My Fire”, Skrillex brings his usual flutter/stutter/splatter, and just in case you still didn’t know the Doors were involved, there’s some organ. They are a cinema. Or they’re going to be in cinemas soon. We forget.

RE:GENERATION, set to debut early next year as part of Grammy Week, pairs five DJs/producers with artists from different genres: DJ Premier works on a classical track with Nas and the Berklee School of Music, Pretty Lights goes country with LeAnn Rimes and bluegrass veteran Ralph Stanley, the Crystal Method try their hand at R&B with Martha Reeves (of “& the Vandellas” fame), and Mark Ronson, well, he turns jazz man with Erykah Badu, Trombone Shorty, and members of the Dap Kings. You can hear Premo’s “hip-hop symphony” with Nas and orchestra below, along with Pretty Lights’ take on “Wayfaring Stranger” (via AOL’s Spinner) and the Crystal Method’s Reeves-featuring “I’m Not Leaving” (via Consequence of Sound). Nowhere to run to: