The dubstep party-starter has recorded a song with the surviving members of Jim Morrison's famed rock band for an upcoming documentary. 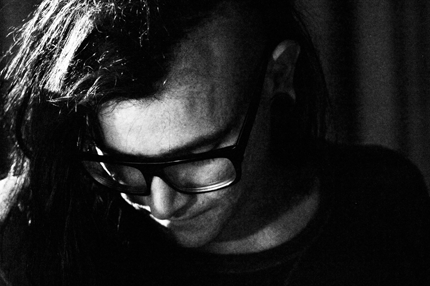 Skrillex keeps churning out new projects at a pace that matches his endorphin-rush beats. The 23-year-old producer is in the thick of a 51-city North American tour, and he recently kicked off his own OWSLA label, when he wasn’t remixing a video game theme song or premiering a gravity-defying new video. And he isn’t slowing down.

Now, the fresh face of Los Angeles electronic dance music — and SPIN’s October cover subject — has joined forces with one of the bands that helped put the city’s rock scene on the map. Skrillex, known to his folks as Sonny Moore, has recorded a song with the surviving members of the Doors: organ player Ray Manzarek, guitarist Robby Krieger, and drummer John Densmore. The track is for a new documentary film titled RE:GENERATION, which paired five DJs/producers with artists from five disparate genres and had them create new tracks.

Directed by Amir Bar Lev (The Tillman Story, My Kid Could Paint That) and produced in association with the Grammys, the movie also features DJ Premier, who worked on a classical track with Nas and the Berklee School of Music Orchestra; Pretty Lights, who worked on a country song with Leann Rimes and Ralph Stanley; the Crystal Method, who worked on an R&B tune with Martha Reeves; and Mark Ronson, who worked on a jazz number with Erykah Badu, Trombone Shorty, and members of the Dap Kings.

Based on early trailers for the movie, Skrillex’s collaboration with the Doors puts their rootsy, roadhouse-blues playing over his thumping electro-house beats. “We’re gonna try to make some awesome hybrid of Doors and Skrillex, create something really cool,” Moore says in one trailer for the project. “This is the first new Doors track in the 21st century,” Manzarek says in a separate video. For more information on RE:GENERATION, visit the film’s website.

Meanwhile, Skrillex’s OWSLA label — named in reference to the children’s fiction classic Watership Down — has also been popping out new material at a rate worthy of bunny rabbits. The latest is German electro-house producer Zedd’s new single, “Shave It,” which is available via Beatport. Before that, North Carolina producer Porter Robinson released his debut EP, Spitfire, which sold 27,000 downloads in his first two weeks on Beatport.

“OWSLA is sick because of its attitude and approach to its artists,” Robinson says of the label, in an e-mail. “It’s less overtly formal. It’s like the label just exists amongst friends. I think a lot of labels end up having an adversarial relationship with their artists because their interests aren’t always aligned, and OWSLA isn’t like that.”

Anton “Zedd” Zaslavski started making electronic dance music in 2009 and quickly won two remix contests, which gave him the opportunity to release official remixes for artists as well-known as Lady Gaga, the Black Eyed Peas, Diddy, Swedish House Mafia, and, of course, Skrillex. Like his label boss, Zedd previously served in a rock group — though, as a child of musicians, he has also been playing the piano since age 4. Zedd’s single “Dovregubben” spent four weeks at the top of Beatport’s electro-house chart.

Citing electro-house kingpins Wolfgang Gartner, Deadmau5, and Justice among his inspirations, Zedd says his career basically started the day he and Skrillex met. “He was a very early believer and gave me the chance to remix his songs before anyone would be interested in listening to my music,” Zedd told SPIN in an e-mail. “Skrillex is not just a DJ or a producer, he’s in the first place a musician and that is why I love working with him. He ‘understands’ music, feels what I feel when I hear things.”

For his part, Robinson has opened Tiësto’s “College Invasion” tour, supported Deadmau5 at several live dates, and appeared at Electric Daisy Carnival and Electric Zoo– and he’s still only 19. He lists Gartner, Noisia, and Dirtyloud as the first three acts that made him want to make the music he does. “I enjoy beauty and emotion — the sort of epic trance stuff that’s not in favor right now — and I also love high-energy, danceable stuff,” he explains. “Combining the two has only been natural.” Check out Spitfire track “Unison” here.

As for touring with Tiësto, when you open for a dance-music megastar with an estimated annual income of $20 million, it turns out you can expect an extremely high degree of professionalism. “The crew just takes care of things,” Robinson enthuses. “I get to play on the same stage every night with incredible lighting and production and sound every day. It’s almost like a vacation. The shows have been just bonkers, too.”