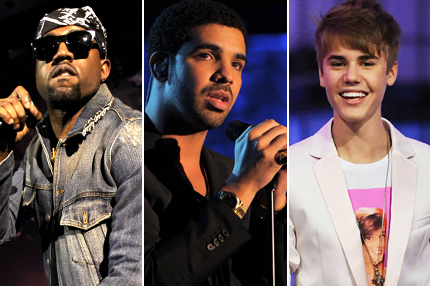 Justin Bieber lost his swagger coach, Ryan Good, earlier this month, but the hip-hop community has not lost its love for the 17-year-old pop star who caused at least three riots in 2011. Bieber told Capital FM (via MTV News) he’s lined up some “cool people” to collaborate on his next album, due out shortly after his Christmas disc Under the Mistletoe’ on October 31: Kanye West and Drake.

Why would two of hip-hop’s biggest stars team up with a Canadian kid who was denied the chance to rap at the BET Awards by DJ Premier (who balked when Bieber wanted to get Ludacris to pen his verse: “Justin, you got to take a backseat. Write your own rhyme, honey. You got to call him ‘honey’ on that one”)?

The aforementioned riots and 2 million copies of My World 2.0 Bieber sold probably help. Bieber has had an unlikely bromance with the hip-hop world since Usher began guiding his career three years ago. He dropped his own (likely ghost-written) freestyle in October 2010, debuting his rap alter ego “Shawty Mane” over a Cam’ron track. He rapped on Chris Brown’s mixtape.

West was one of the first to embrace Biebs, remixing “Runaway Love” while he was promoting My Beautiful Dark Twisted Fantasy last year. (At the time, Bieber said, “He’s such a cool guy, and he’s just really laid back and just nice, and at the end of the day, he’s just a nice person.” Aw.) And Bieber courted Drake by remixing the latter’s “Trust Issues” last month — minus the f-bomb the Canadian MC drops, the references to drinking, and the word “bitch.”

Bieber may not be the toughest kid in the game, but as far as Kanye collaborations go, things could be much, much worse.