The Seattle band offers up a rollicking new song, "Olé," and plays it on 'Late Night With Jimmy Fallon.' 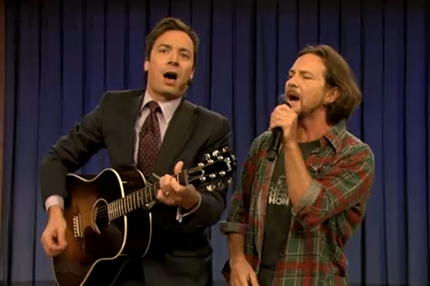 What do you say when your rock band has just celebrated its 20th anniversary? If you’re Pearl Jam, you say “Olé.” Days after Eddie Vedder & co. held a massive, star-studded birthday bash in Alpine Valley, WI, the band offered up this refreshingly raw, frenzied burst. Download the MP3 at Pearl Jam’s website, or watch the band play the song on Late Night With Jimmy Fallon below.

Pearl Jam covered the MC5’s “Kick Out the Jams” at Alpine Valley, and “Olé” has a similar off-the-rails recklessness. As the band careens along at top speed, Vedder spits the lyrics with rabid ferocity. So much rabid ferocity, in fact, you might not even notice the underlying political frustration: Vedder “ain’t got words” for all the trouble he’s seen. No words, that is, but “¡Olé!”

Last night Pearl Jam stopped by Fallon to rock late-night viewers from their slumber, as Anthrax had the night before. Dressed in flannel (!), a guitar-less Vedder rasped and screamed his way through the new song with the kind of showmanship Pearl Jam’s huge concert following facilitates; especially dig the way he yelps about “knuckleheads.”

It was a Pearl Jam kind of show. Cameron Crowe talked with Fallon about the director’s upcoming PJ20 documentary. And Vedder joined the Roots to back Fallon on a “protest song” about last year’s BP oil spill, titled — yes — “Balls in Your Mouth.” Tar balls, people.