Gaga Gets Crazy in Springsteen-Inspired ‘Hair’

Hear another leaked track from her upcoming album 'Born This Way' 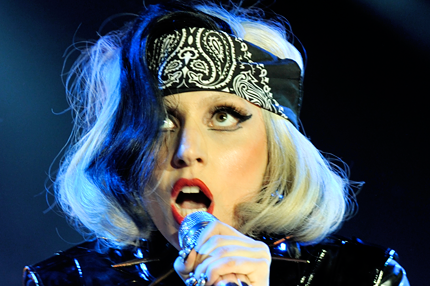 Another week, another Lady Gaga leak. And with only seven days left to go until she releases her much anticipated Born This Way, Gaga’s entered the final stretch of pre-album-release promo mode with the song “Hair,” which she debuted on iTunes today and is available to stream here.

Gaga said in an interview with Ryan Seacrest that “Hair” is one of her favorite songs from the record, and the pop star found musical inspiration in Bruce Springsteen for the tune.Like she did with her last single “The Edge of Glory,” Gaga even roped in E Street Band member Clarence Clemons to contribute a sax solo.

The result is a somewhat schizophrenic number: it starts as a cabaret-style piano-powered ballad (dig the Phil Spector-inspired drum beat) and takes off into a massive four-on-the-floor pop anthem. But things take a dark turn in the bridge, which features Gaga’s vox-tweaked vocals, siren squeals, and other sonic weirdness that would befit the DJ’s playlist at a ’90s rave.

Still, Gaga’s lyrics are uplifting, inspirational, aimed to comfort teenage misfits the world over. “I’ve had enough / This is my prayer / That I’ll die living just as free as my hair,” she sings in the glossy chorus. Judging by the songs that have leaked thus far (including “Judas” and the album’s title track), Born This Way has the potential to be one of the year’s weirdest collections of songs.