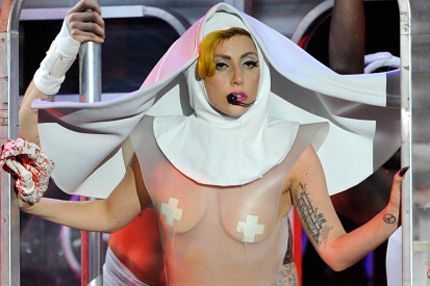 With only two weeks to go until the release of Born This Way — easily one of the most anticipated pop records of the year — Lady Gaga is doing her best to drum up as much buzz as possible. Last week, she premiered her cinematic motorcycle fantasy “Judas,”, aired a mega-concert special on HBO, and now she’s released the new track titled “The Edge of Glory,” which you can hear here.

Photos: Lady Gaga, Before and After

Unlike the cacophonous, frenzied vibe of “Judas,” Gaga gets back to basics on “The Edge of Glory.” The track — helmed by Beck and Britney Spears producer Fernando Garibay — is a four-on-the-floor anthem with loads of references to ’80s pop music. Gaga bellows with her lyrics about love in the time of global apocalypse with the passion of Pat Benatar, while the soaring chorus calls to mind Bonnie Tyler’s “Total Eclipse of the Heart.”

Thankfully, “Edge of Glory” proves Gaga hasn’t let her global celebrity get the best of her art, and she’s still capable to cranking out straightforward, dance-ready jams like “Just Dance” or “Poker Face.”

Hear It: Lady Gaga, “The Edge of the World.”