After months of teases, the pop star releases first single from Spring album. 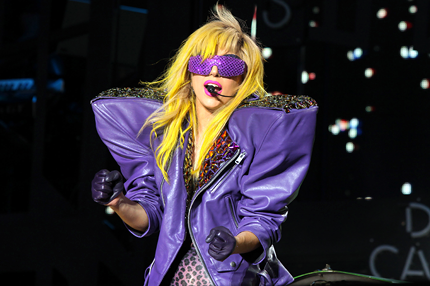 After months of teasing lyrics, artwork, and release dates, Lady Gaga has finally released her highly anticipated new single “Born This Way,” from her album due out this May. Check it out below (or head to Gaga’s official site to pre-order the album and get the single now).

At first, “Born This Way” sounds like trademark Gaga: all icy synths, thumping house beats, and a massive, theatrical chorus that splits the difference between Madonna’s 1989 classic “Express Yourself” and David Guetta and Kelly Rowland’s 2009 anthem “When Love Takes Over.” But the song is also one of Gaga’s most overtly political ones, with an inspirational (if heavy-handed) message about embracing and celebrating diversity. Consider “Born This Way” to be Gaga’s rejiggering of Michael Jackson’s 1991 single “Black or White.”

“Don’t be a drag, just be a queen, whether you’re broke or evergreen,” Gaga raps mid-song, over buzzing synths and a four-on-the-floor beat. “You’re black, white, beige, Chola descent / You’re Lebanese, you’re Orient…Rejoice and love yourself today / ‘Cause baby you were born this way.”

Based on all the hype surrounding the single, you’d think Gaga was releasing a song as epic and instantly classic as the Beatles’ “A Day in the Life” or Queen’s “Bohemian Rhapsody.” Imagine what she’d come up with if she’d spent more than ten minutes writing “Born This Way.”

What do you think of “Born This Way”? Is it an instant classic – or a dud? Sound off below.

MORE ON SPIN.COM
PHOTOS: Lady Gaga Before and After