Check out the R&B prodigy's clip for "Cold War," full of tears -- and skin! 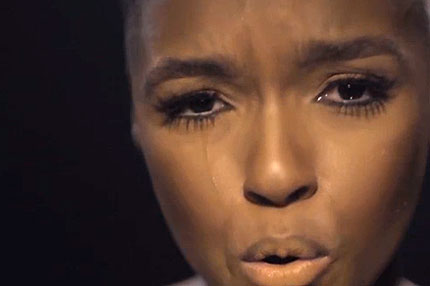 R&B darling Janelle Monae just released her new clip for “Cold War” via Pitchfork, and unlike her previous videos, which leaned on extensive dance sequences (see “Tightrope”), this one is much more stripped down — literally. Check it out below!

The video opens with an above-the-neck camera shot of a bare-shouldered Monae. She sings, staring directly into the camera, appearing more and more emotional as the song progresses — think D’Angelo’s famous “Untitled” video, but a bit more PG rated. “This is a cold war,” she pleads through tears. “Do you know what you’re fighting for?”

“Cold War” is the second single off her stellar album, The ArchAndroid, one of the best albums of 2010, so far. She also kicks off an extensive fall tour with Of Montreal on September 13 at the 9:30 Club in Washington D.C. Check out dates here.

What do you think about Janelle Monae’s new video? Tell us in the comment section below!